Pour a small amount of milk into a shallow container.  Then have your child put a few drops of food coloring on top. 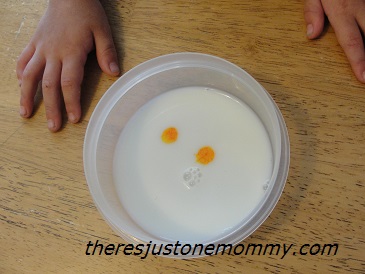 Now for the fun part — you need a couple “magic wands.”  Don’t have any?  You just need a toothpick with a little liquid dish soap on the tip.  (For extra affect I said a few “abracadabra’s” while I prepared them.)

Once the soapy end of the toothpick touches the food coloring, BOOM!  It’s like mini fireworks of color in the milk.

If your kids are anything like mine they will ask to do this one several times.

Start with a small amount of water (1/4″ deep) in a plastic container.

Have your child shake a bit of pepper on top of the water.   I think this might have been their favorite part.  (There is just something about shaking stuff when you’re a kid.) 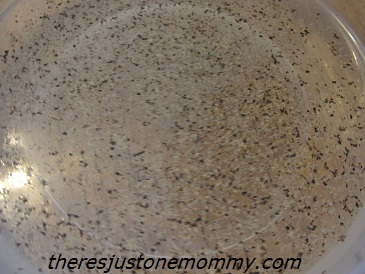 Once they have some pepper floating on top of the water, give them the same “magic wands” as before. 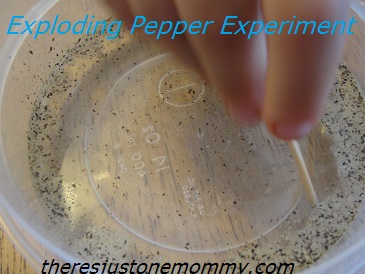 The pepper immediately scatters away from the toothpick.

This was another one my kids had to do over and over again.  (I have to admit, I was pretty impressed by this one, too!)

Science experiments are always a hit with kids.  After trying out the exploding milk experiment and exploding pepper experiment, try a few of these: