For my UK readers, check out this slime recipe using Kershaw’s laundry starch.

Gold Slime — This slime is gorgeous!  Add a few plastic gold coins and it would be perfect for St. Patrick’s Day or even as a pirate’s buried treasure.

2 Ingredient Sparkly Slime —  With vivid color and plenty of sparkle, glitter slime doesn’t get much easier than this.

Polka Dot Slime — The colorful polka dots make this one so fun.  They are sure to inspired creativity and add a whole different level to the sensory experience.  I think this one would be fun to go with the Put Me in the Zoo.

Rainbow Slime — Beautiful doesn’t even come close to describing this one.

Peppermint-Scented Slime — Add one more level to the sensory play with this scented slime.

Unicorn Poop Slime — The name says it all — a swirl of bright rainbow colors.

Water Bead Slime — This one combines the fun of water bead sensory play with the oozy goodness of slime.

Yellow Chick Slime — This would be so cute tucked into an Easter basket.

Snow Slime — This one is perfect for small world play with arctic animals.

Jungle Slime —  The gorgeous greens will make you imagine you hear monkeys swinging through the trees.

Emoji Slime — This one is a fun idea for a party favor.

Fluffy Slime — All the fun of slime with a fluffy twist!

Under the Sea Slime — A mixture of blues and greens help recreate the look of the sea in this pretty slime recipe.

Sand Slime — Sand is a wonderful sensory experience all on its own.  Mixing it with liquid starch slime will have you dreaming of summer days on the beach.

Mud Slime — This unique slime mixes the fun of making mud pies with super stretchiness.  Toss in a few toy bugs for hours of play.  And, yes, real mud is involved.

Glow in the Dark Slime —  Kids love slime.  Kids love things that glow in the dark.  Combine the two and you have a winning combination.

Star Wars Galaxy Slime — A beautiful and dark colored slime.  Add in glow in the dark stars and a few miniature Star Wars toys and it is sure to be a huge hit.

Molten Lava Slime — This one’s another fun one for Star Wars fans.  Or grab a handful of plastic dinosaurs and help them escape from the lava.

Disney Frozen Slime — The colors and snowflakes are reminiscent of Elsa’s beautiful dress.

Fairy Slime —   Know someone that loves all things fairy?  Tiny dots spreading into ribbons of rainbow color give this one a magical feel.

Flubber — This is an extra thick, stretchy slime.

Googly Eye Slime — Everything is better with googly eyes, even slime!

Floam — This version is a bit stretchier than store bought Floam, and oh so fun to play with.

Lego Treasure Slime — This one is perfect for Lego fans.  Plus, working those tiny Lego pieces out of the slime is great for working on finger-strength to help with fine motor skills.

Magnetic Slime —  Who says you can’t teach slime tricks?  Grab a magnet and amaze the kids as this slime moves all on its own.

Take that homemade slime to the next level and make it amazing with one of these awesome liquid starch slime recipes. 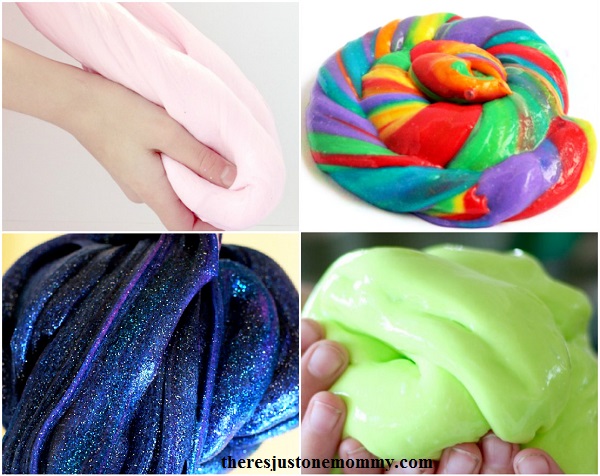