So, even after all our fun conversation hearts activities, we still had a few candies left.  10, to be exact, were left in the toddler’s little box. 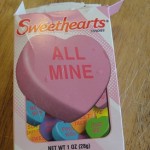 Now little guy’s hair was starting to look kind of shaggy.  His bangs were just about in his eyes, and it was all fluffy in the back.  Usually Grandma Owl trims it up all nice for me.  Well, at least she has ever since my one and only attempt at cutting it, where it turned out very much the bowl cut…  But Grandma Owl had surgery a couple of weeks ago, and she’s still not up to the task of cutting a wiggly 2 year-old’s hair.

See where this is going?

So I had a brilliant idea.  I’ve seen her cut his hair a few times now; after all, I am the one that holds him still while she cuts.  So I got out the scissors, and a comb and grabbed the box of conversation hearts.

Turns out that 10 conversation hearts takes a 2 year-old boy long enough to eat (1 at a time) that you can cut his hair.  Well, if you are cutting quickly. 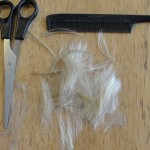 Now, I should mention that getting it cut, and getting it cut straight are two different things.  His bangs need straightened out a little more… (once the candy was gone, he was pretty sure he was done).  And as I looked at him this morning I can see his left side is pretty angled towards the back of his head while the right side  has the customary straight “boy cut” look.  (Hey, I got one side right…)

But he’s still handsome, if you ask me. 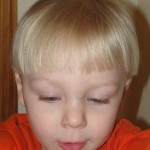 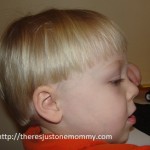 So, who cuts your little one’s hair?