Oh, the weather outside is frightful, but the fire’s so delightful….and since we have no place to go —

Let’s make a small world out of snow! 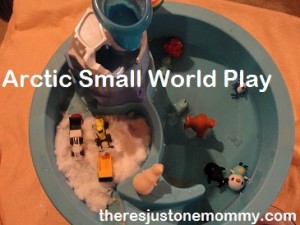 We’ve been stuck inside the past few days due to windchill factors well below zero.  Even though the kids generally are best buds, we were all getting to the point of getting on each other’s nerves.

I was trying to think of something fun for the kids to do, when my son asked me why we hadn’t played with the water table for a while.

So I dragged it inside from the garage and set it up on an old blanket downstairs.  Then I filled half of the table with water and decided to fill the other half with some of that snow that was piled up outside.

I added a couple polar bears and a walrus from our outdoor toys.  (I figured it would be more exciting to play with toys they hadn’t seen in a while.)  And, of course, I added a few trucks to help move all that snow! 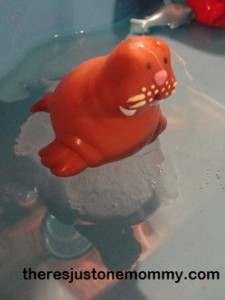 I set up our walrus on a little ice burg made of snow, and then I called them downstairs to play. 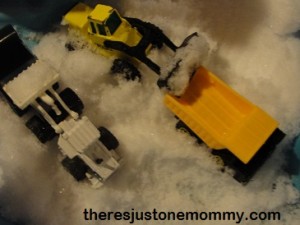 Right away the trucks got to work!

They both had fun seeing what happened when they mixed the snow with the water.  They created several small ice burgs and watched as the snow changed colors (from white to more clear) and eventually melted in the cold water.

They played happily for almost an hour with their Arctic small world, all while staying snug and warm inside.  (I love bringing snow inside!)

I could have really went to town with this idea — we have tons of snow-loving animals in our collection.  But sometimes simple is better.  It was fun listening to them work together to tell a story about the trucks moving snow for the polar bear and his friends.  And it was just the distraction they needed from being cooped up inside.