I’ve been wanting to ask my husband to do a guest post for Thankful Thursday for a while now…  And when I read this prompt from Mama Kat’s Writer’s Workshop?  I had to jump on it!  The prompt?  Bacon.

You see, last night we saw a commercial for mayonnaise.  The commercial claimed that mayo made a B.L.T. better.  My husband jumped on it, “No, it’s called a B.L.T. because bacon is the most important part of it.  In fact, if you want to make it better, you add more bacon.”

So I asked him to tell me a little more about bacon, which I’m finding is something that men rate right up there.

Here are a few of his random bacon thoughts:


Bacon is the one thing they put on salads to trick you into eating salads when you’re really just after the bacon.

There aren’t many things that bacon don’t go with. 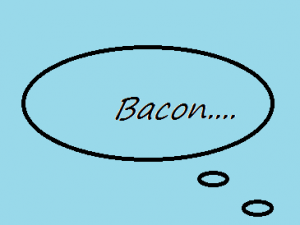 I’ve decided, next time I goof up around here, I’m making him bacon for dinner:  flowers to apologize to women, bacon for men. (I’ve also decided he still owes me a Thankful Thursday post…)

So this week, thanks for bacon!

What food product are you thankful for?

And, if you have your own thankful post, come link up with us!

Linked up this week with Black Tag Diaries, The Fontenot Four