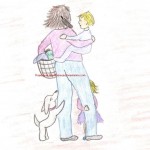 Originally this week’s Manic Monday post was going to center around a HUGE fit my preschooler had after her play date this week.  I mean GIGANTIC fit like none I’ve seen before…. But then this happened, and I had to share….

My husband had spent part of the day doing some car maintenance and the kids and I were outside looking at bugs.  The kids and I all agreed the dog was super stinky (thanks to the summer heat it seems she is always stinky lately).  So we gave her a bath.  Somehow we all stayed dry, that is until my toddler used the hose to water a few plants for me.  His shirt and pants were  a little wet, but not too bad.

It was getting close to dinner time, so I ushered the kids inside.  I checked the time – almost 6:00 (our usual dinner time).  Better go get that pizza soon or get started making a quick dinner at home…

That’s when I realized the kids had run down the hall and the bathroom light was on.  What were they doing? A quick glance showed the toddler standing in the tub while his preschooler sister tossed tub toys in.   Before I could remove him from the tub and grab him some dry clothes the phone rang.

It was an automated Kroger grocery phone call about the recent ground turkey recall.  Since we have a bunch of ground turkey in the downstairs freezer I got a pen and paper to write down the info.

As I was writing the information down I glanced down the hallway and saw Peanut with two cups in her hand, climbing off the step stool at the bathroom sink.  Great, she had gotten them both drinks of water; at least Monkey was in the tub so if he spilled his it wouldn’t make a mess, right?

When I got to the bathroom she was carrying another two cups of water… and I noticed what she was doing.  She was filling the tub up for her brother to take a bath, two little cups of water at a time.  Monkey thought it was great.  “Bath!” he kept saying at each addition of water.

Big sister just can’t stand not helping her little brother get what he wants.

There was no way I was going to convince him at this point that it was NOT bath time.  I helped him pull off his clothes, turned on the tub faucet, and declared that it was indeed bath time.

So much for running out for pizza, but at least they were happy and not hanging onto my legs begging for food while I made dinner, right?