It’s no secret: I LOVE to read.  Even when I was little, I’d read the backs of cereal boxes, shampoo bottles, anything with words that I could get my hands on.

That being said, I never really did a lot of reading of what you might call Christian books, until recently.  After doing the book review for Lonely Girl, Gracious God, I was asked to review a couple more books.  I have to say I was pretty excited to get some new reading material in the mail just in time for some summer reading.

I chose The Son in My Eyes:  Seeing the Light of Jesus in Vietnam because part of the book takes place in Vietnam during the Vietnam War, and  it’s a topic that I am not as familiar with as I feel I should be,  so I was interested. 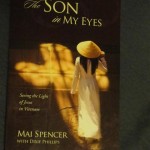 The Son in My Eyes is a 285 page true story written by Mai Spencer with help from Dixie Phillips.  The book details Mai’s life growing up in Vietnam during the war, worshiping Buddha just as generations of her family had, and how Christ slowly changed her heart and her life.

Growing up Mai faced numerous challenges due to poverty, abuse, and the war going on around her.  Many were unimaginable to me, living here in the United States at present time.  Her ability to overcome each obstacle was inspiring as I read her story.  Not only that, but I was able to get a glimpse of life in Vietnam, learning a little about their culture and beliefs.  For instance, when Mai was a girl women were not allowed back in the family home for a certain number of days after giving birth; it was thought that they were unclean.  I can’t imagine separating a mother from her family at that time, a time when a family should be celebrating and pulling together.

Being one of the oldest children in her family, Mai worked extremely hard to help support her family; she had no time to be a child.  After moving away from her family she met an American soldier, whom she later married.  She and Dennis eventually moved to the United States.  At that time she received a Bible written in Vietnamese.  Mai compared this to God planting a seed, which was “watered” over many years, leading her to choose Christ as her savior.

Mai’s life in America was still faced with hardships; she had three children die in the course of the book.  She never blamed these tragedies on God, as so many people are tempted to do.  Even more inspiring, to me, was that she was actually thankful that God had brought her home early from one of her visits to Vietnam so she was home when her son died.

One thing I liked in the book was how Mai talked about the “little prayers” she would say and then how they were often answered.  I believe that God is always listening, and there is no prayer that is too big or too small.  Mai incorporates many Bible passages in her book. At times I felt like they overpowered her story a little, although I understood her desire to share God’s word.

Mai’s faith in the Lord is so strong that she gave up a successful business to create Jesus in Vietnam Ministries with her husband.

If you like to read inspiring true stories on how Christ has changed lives, this book is for you.  You can find it at Amazon

*I received a free copy of this book from Bring It On! Communications for review purposes. I was not monetarily compensated in any way for this review. All opinions are my own.