When I took my youngest for his yearly check-up at the doctor’s office, the doctor went through a list of “age-appropriate” skills.  One of the things he asked was if my son could button a button.

Hmmm….  Good question.  I honestly didn’t know; after all, they don’t tend to put buttons on the younger kids’ clothes anymore, so he really hadn’t had an opportunity to practice.

That got me thinking, if he doesn’t want to use one of those “learn to dress dolls,” what other ways could he practice those skills?

Yes, I could have him button up a sweater while I wear it.  (But do I really want to sit still all that time while he does that?)  Or I could put the sweater over the back of a kitchen chair, but honestly I don’t think my active 3 year-old son is going to think that is any fun…

Nope, I needed something to catch his interest.

And it came to me one night while I was singing him to sleep.  (Surprisingly I come up with some of my best ideas that way…)

I have plenty of felt.  (Cloth that sticks to itself and doesn’t need a hem to keep from unraveling?  Just awesome.)  I remembered something I had seen on Pinterest:   plain squares of felt with buttons on one piece and a button hole on a second piece for kids to practice buttoning skills.  But I wanted to jazz it up a bit, make it something that would really grab his interest from the start.

I considered doing something with cars…  But decided to go a little simpler – bugs!  After all, he has been known to love bugs.

I chose 3 bugs that are pretty simple to draw:  a bee, ladybug, and spider.  Then I drew each of them something to sit on:  a flower, leaf, and spiderweb. 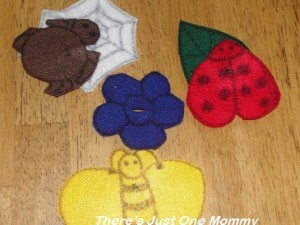 Since, I didn’t want the button to show up on the bug’s back,  I sewed the button on the backside of each bug. 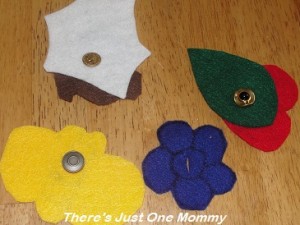 He was really excited with his new “friends.”  I showed him how to maneuver the button through the button hole and back out again.  He caught on to the buttoning part fairly quickly; unbuttoning the pieces was a little trickier.

I’ve put the “button bugs” in one of the quiet time boxes we have (which is something I hope to share with you all soon), so he can practice with them each week.

And next time the doctor asks if he can do a button?  I’ll be able to say, yes!

Shared on some of these family-friendly link up parties.