When kids are young it’s important for them to have a space of their own to play in.  Our kids have taken over the living room… But when one of my very generous family members noticed what a climber my daughter is (she seriously would climb the walls if she could…) and gave us a Little Tykes climber to put in our basement, I thought, why not make a play area in the basement?

The problem, of course, is that our basement is unfinished and there is TONS of stuff down there that kids should not get into…

So just what do you do when you want a play area, but can’t afford to build walls to help keep the kids in their allowed space?

Get creative!
We had tons of big boxes just kind of sitting downstairs. We had both boxes from the kids’ car seats, a box from the new grill we got last summer, some boxes just from ordering things online… If real walls weren’t going to happen to keep kids out of Daddy’s area, then there were going to be walls around the play area!
Most of the boxes I chose were taller than our oldest child, eliminating the ability to climb over them. I opened up each of the boxes and decorated them with permanent markers at night after the kids were asleep.  I picked a jungle theme since at the time both of their rooms were in that theme and they love animals.  I raided the gift bag collection and found some metallic ones to use as mirrors.  I also cut peek-a-boo flaps into my “walls” and taped gift bag pictures on the back for the kids to find when they lifted the flaps.

When I thought I had enough “walls”, I stood them up and ran duct tape along the box flaps that I had left at the bottom of each wall. I also used duct tape to tape the sections together, angling them back and forth instead of making them perfectly straight to keep them from tipping over too easily.  My husband helped get some of our heavier boxes of stored items and put one behind every other section to give it a little more stability, in case of a charging toddler.  For a “door” we used a large piece of extra thick cardboard and just leaned it against the bottom step and the closest cardboard wall section. It’s easy to move when Mommy or Daddy needs to, and still slows down a 3 or 1 ½ year old, should they plan an escape. 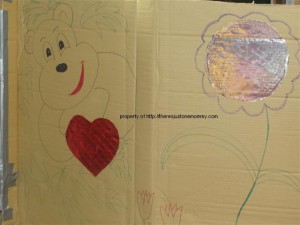 The kids loved it when they came down the next day.  One of the sections I am most proud of is the rotating wheel with Sesame Street character bodies that you match to the heads on the wall.  I just used a double sided button poked through a hole in the wheel and one in the wall to hold it on to the cardboard wall. I also used a very strong cardboard tube that a poster had come in to make a “ball drop”. My son loves to drop balls down it over and over.  A simple piece of felt hot glued to the wall provided a quick and easy felt board.  (Looking for a felt board for traveling?  Look here.) 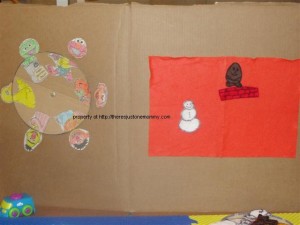 So, not only do they have a walled in play area now, but the wall is also functional as a way to entertain them a little further. Not only that, but it is easy to change with their interests…
And the best part? Unlike hiring a contractor to build a room, or trying to do it ourselves, it was all pretty much free, and it was done in just a few days. We had the boxes. We had duct tape and markers. All we’ve spent money on are some additional foam mats to cover the rest of the play area floor, since concrete isn’t forgiving of toddlers who are just learning to walk, nor is it really comfortable to sit on.

The bouncy Fisher Price zebra with the loud music, the rocking airplane I had bought at Once Upon a Child, the ball you sit and jump on, and the ball pit we put together for our son’s birthday… All those energetic, noisy types of toys have gone downstairs, out of my living room… 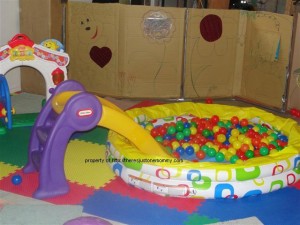 I’ve made several updates to our walls since this post.  We’ve gone through a Dora phase and most recently and Octonauts phase.  And, it is still all holding up, 2 years later.