We were rocking in the New Year at the There’s Just One Mommy household today!

Staying up past midnight?  Over-rated (not to mention, as a parent of preschoolers, one who doesn’t sleep well, we value our sleep around here….).  But celebrating at noon?

The party started at 11:00, complete with awesome party hats the kids and I put together the day before.

There was quite a stack of games ready to entertain a couple preschoolers…. 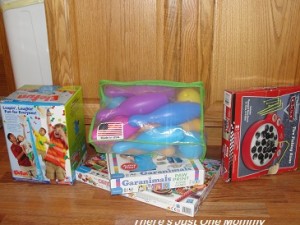 The only problem?  The 5 year-old was having one of those grumpy moments.

It didn’t get any better when I showed them a sign with 2012 on it and said we were saying good bye to the year 2012 and hello to 2013.  She actually started to cry, “I want to keep 2012!”  I originally wanted to go over the highlights from the year and ask them to tell me what they’d like to do this year….  You know what they say about the best laid plans…. 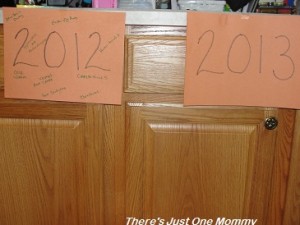 Somehow we made it to the last 5 minutes, and then the excitement started to build…

Amidst the sound of kazoos, Daddy dumped the basket of balloons and confetti on their heads.

This was followed shortly by the “pop, pop, pop” of 20 little balloons being destroyed far faster than I had blown them up. 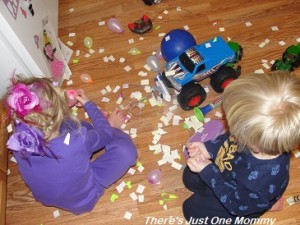 Just who decided the balloons would be a fun idea?  Oh, yeah, that was me….  (And I must say, they DID have a blast popping them!)

Then it was time for bubbly punch and party food.  (Read that as food eaten with a toothpick:  cheese squares, ham, grape tomatoes, strawberries, pickles…)  Oh!  And I mustn’t forget the 2013 cupcake-cookies (made with the tops I had cut off to make the teacup cupcakes for the tea party back in October). 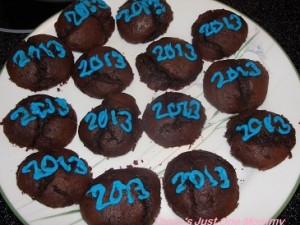 How did you ring in the New Year?