Like so many little boys his age, Monkey has a fondness for trains.  (Okay, that’s an understatement; he’s obsessed with anything with wheels!)  So when Uncle D. invited us to the train show, we couldn’t resist.

There were the usual venders, trying to sell trains, track, and other miniature parts for train sets.  There were also tons of trains set up for us to watch.

One we kept coming back to was this large set up on the floor, where they could get really, really close. 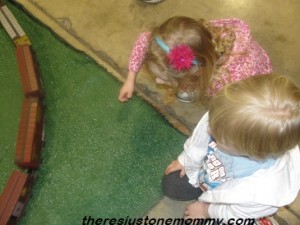 Of course, most of the trains were up on tables; after all, adults aren’t as comfy watching trains on the cement floor.   Not wanting to hog the kids all to myself, I let Uncle D. have a few turns helping them see the trains. 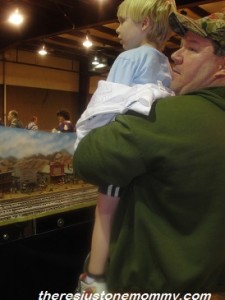 It is amazing what detail they put into these displays!  There were farms complete with lots of itty-bitty cattle, bridges over babbling brooks, and burning buildings with all the emergency vehicles ready to help. 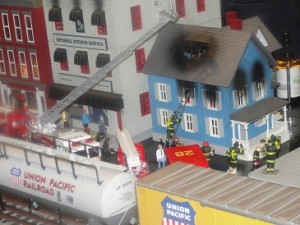 We even spotted the Batmobile and Superman (coming out of a phone booth, no less) in one of them!

Oh, and, to the joy of many small ones there, Thomas was seen in a few displays as well.

Monkey picked out a new train for his set at home, while my energetic little girl opted to try her hand at the pedal trains. 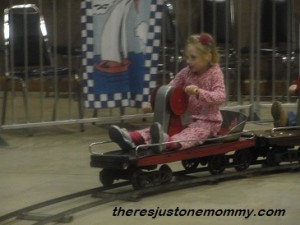 Overall they both had lots of fun at the train show, and they were both worn out by the end!  (It was almost as much fun as the dollhouse show we went to last year….)

Have you taken the kids to see trains set up anywhere?

Today is the last day to enter our Sibu Beauty Giveaway…  Good luck!