Last year it was Lightning McQueen for my car-obsessed son and a Tinkerbell ornament for my daughter to remind her of her first trip to DIsney World.  The year before that it was a Tonka dump truck (the back even tips!) and a beautiful princess dress on a hanger for my little girl who loves dressing up.

I knew just what I wanted to find this year:  Spiderman (Monkey is just starting to get into superheroes) and something in cheetah print (check out my little cheetah from Halloween this year).  While I was having no trouble finding Spiderman, they were all ones that could easily break, not ideal for a 3 year-old.  And there wasn’t a cheetah print ornament to be found anywhere.

Thankfully inspiration hit when I least expected it — in the form of cheetah print tissues.  I was just leaving the craft store when I spotted them next to the cash register.  I had already seen the plastic bulbs that you can fill to create your own ornaments, but at that point I had been trying to figure out if I could find a small enough Spiderman or cheetah to stick in them.  The tissues gave me a whole new idea.

I picked up a pack,  a pack of fabric flowers with a few cheetah print ones in it, and 2 plastic bulbs. 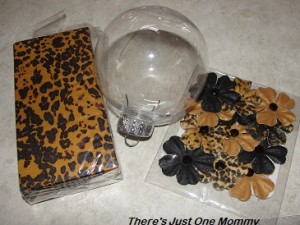 Once home I cut strips from the tissues and used a chopstick to push the strips all the way into the bulb.  Then I used the hot glue gun to apply the flowers on the outside and tied a black ribbon on for a hanger. 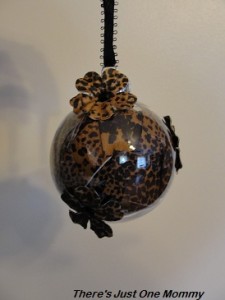 As for Spiderman, I grabbed some blue and red tissue paper from the craft box, cut it into strips to fill the bulb and applied some flashy hologram Spiderman stickers to it.  A red ribbon completed the ornament. 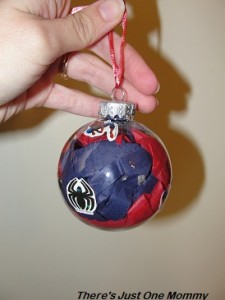 My daughter was thrilled with her cheetah ornament, and little guy was all excited when he realized he had a special ornament, too.  Not bad for something so simple and under $4.

Do you do something similar for your kids?  What kinds of ornaments have they gotten over the years?

Shared on A Vision to Remember, Be Different Act Normal, Ladybug Blessings