My daughter is a climber.

She always has been, ever since she started walking.  It was one reason I became a multitasking mom when nursing her brother.  I’ve even shared a picture or two of her climbing the door frames.

Once she started climbing her dresser (which IS fastened to the wall) and jumping from it, I KNEW we had to find her something she was ALLOWED to climb indoors.  (After all, we do have climbing stuff outside, but the weather doesn’t always cooperate with her climbing instincts.)

I started daydreaming about one of those climbing walls.  I’ve heard of people making them on walls in their basement, or even in the garage.

But I wasn’t sure we were ready to commit to that.

Then, with the help of a few Pinterest ideas, we came up with a plan.  A stand-alone climbing wall that can be moved when needed, with two sides to climb on, put together a little like an A-Frame house.

A trip to the hardware store and an Amazon order for handholds, and my husband got to work. 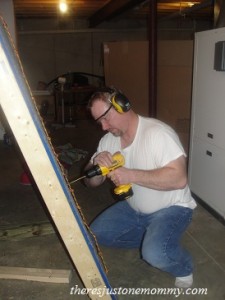 I wish I had a picture of how I decided where to put handholds.  I literally held up each kid and asked them to pretend to climb the wall.  While holding them against the wall, I marked spots with a permanent marker.  While I was getting worn out, they were having a blast and kept asking to “do it one more time!”

Once it was finished, our daughter was itching to get climbing right away… 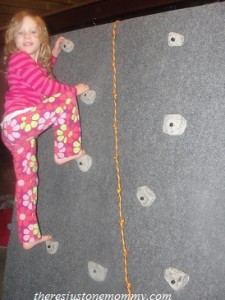 Our son wasn’t sure at first.

But once he realized it wasn’t a full-sized wall, he had to give it a try. 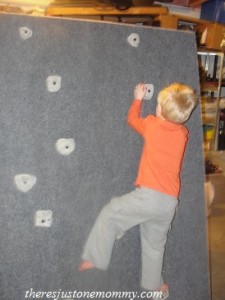 We finally got them off the wall long enough to move it into the downstairs play area.

Do you have a climber in your house?

For all my FB fans, don’t forget to enter the felt doll giveaway!