One day, after watching yet another fun-filled episode of Sesame Street, where the character Zoe had her pet rock over to visit Elmo, I got an idea for a craft my daughter (and her rock collecting brother) could really fall in love with. 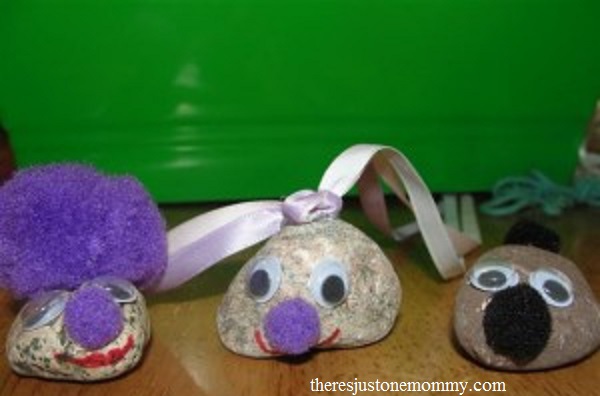 We didn’t have to go far for rocks, just out to the driveway, where the little ones have spent countless hours looking for “pretty rocks.”

Once we had several to choose from we took them inside.  A recent trip to the dollar store had supplied me with oodles of new craft supplies; I put a few samples of each item, along with a few other odds and ends in a box for them to explore while I hunted out the glue gun… 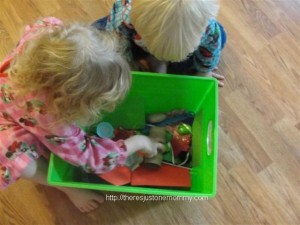 Once the glue gun was heating up, I put all the craft items I thought might be useful out on the table… These weren’t going to be the boring pet rocks with marker or paint faces like the ones I made as a kid!

I gave them full reign over how they decorated their new “pets.”  After all, that’s part of the fun, and helping them develop their own sense of creativity and pride in their work is important.

They scoured the different sized googly eyes and each picked out some, telling me exactly where to glue them onto the rock.  (Older kids may be able to help with this, but at the time mine were way too young!)

Then they got creative.  I never thought of pom-pom noses, but Peanut did right away!  Her brother thought it was a good idea, too.  Then he thought one on the other end might look nice…

I’ve mentioned before that my preschooler is into princesses….

We just saw Tangled for the first time recently, so when she saw the long ribbon in the craft stuff, she couldn’t wait to use it for hair!  (Mommy never thought of that – one of the great parts of letting them just go at it is seeing just how creative they can be!)

A little permanent marker smile, and voila` – a simple, fun, and thrifty craft they can play with afterwards!

My preschooler had so much fun, she decided to make one more…  Her toddler brother decided after seeing the permanent marker, he’d rather color.  To each their own!

They had lots of fun playing with their new friends the rest of the day and couldn’t wait to show Daddy!

Have you ever taken a craft you remember doing as a kid and tried it with your own to see what new creativity you can bring to it?