Disney’s Frozen movie is still making waves, as evidenced by all the Elsa and Anna costumes and party ideas popping up all over Pinterest.  My daughter is one of those Frozen fans, and this week we had a Frozen birthday party, complete with this easy to make Frozen-themed birthday cake. 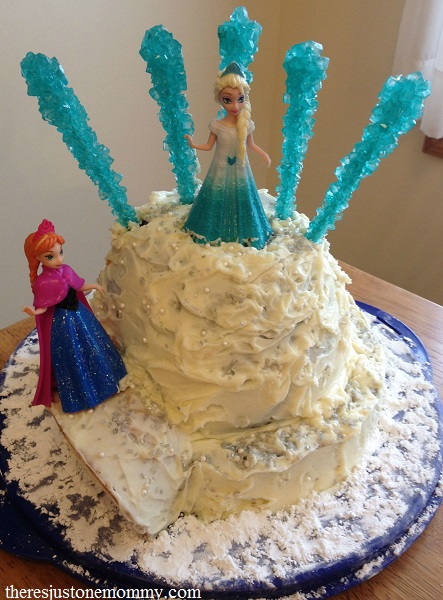 How to make a Disney Frozen birthday cake:

I used two cake mixes for our cake.  The first one I cooked in a large glass measuring cup (like this one

), much like I did for her tea pot birthday cake.

The second I cooked in a 9 inch round cake pan and a cupcake pan.  (I only needed the round cake; the cupcakes I put up in the freezer to enjoy later.)

I assembled the two cakes like the picture below, using plenty of icing between them to hold them together. 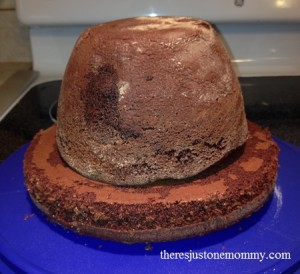 Originally my daughter wanted steps on her Frozen cake.  After watching the movie once again, and seeing how the stairs curved, I decided to use half of a waffle bowl (like you use for ice cream sundaes) to build a curving bridge to act as the stairs for our dear Anna to stand on.

To keep the bridge from sagging beneath Anna’s weight once it was decorated with icing, I squished two large marshmallows beneath it, resting on the round cake below. 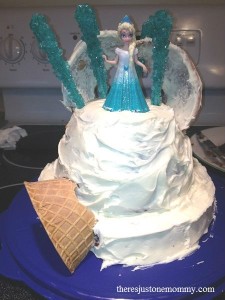 (In the picture above you’ll notice our waffle bowl bridge, waiting for icing.  You’ll also notice two other waffle bowl halves that I originally used to build Elsa’s castle.  Unfortunately, the icing made them too soft and they eventually sagged down to the cake.  Thankfully I had time to remove them and had plenty of left over icing to touch the cake up before party time!)

Once we had plenty of white icing on the cake, we used lots of tiny candy pearls

to decorate the ice castle.

Light blue rock candy sticks and Elsa and Anna dolls finished off of our cake.  (A little powder sugar snow on the cake stand completed our look.) 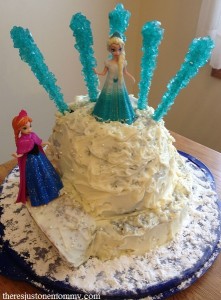 I wish I had a picture of the birthday girl’s face when she first saw the cake.  It’s exactly why I spend time creating the birthday cakes they ask for.

Do you have a Frozen fan at home?  Or have your kids let it go….

If you have a Frozen fan, check out the easy Rock Trolls craft we did at the party!