As I mentioned in an earlier post, we have been having fun learning with candy!   Since science is always a hit here, we’ve done several candy experiments.

The easiest candy science experiment we have done this week was seeing which candy would dissolve first. 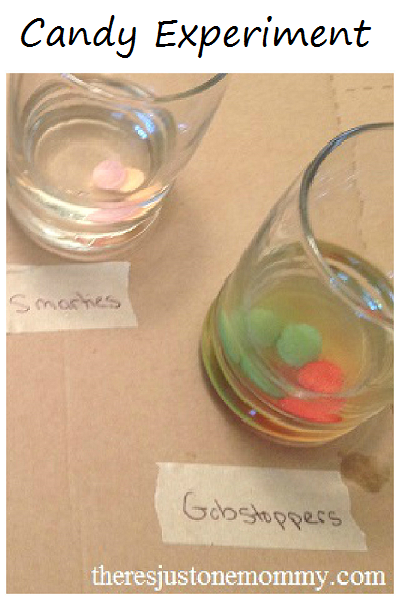 Before trying our experiment I let the kids examine each type of candy.  We looked at how thick they each were, whether they were chewy or hard, and several other factors.

Then I had them each make a hypothesis for how long it would take each candyto dissolve in room temperature water.

They both agreed the Pixy Stix would dissolve quickly, guessing it would be a couple seconds before the flavored sugar disappeared.

They guessed the Smarties would take 5 minutes; the Skittles a half hour and the Gobstoppers an hour.

We wrote these predictions down on a piece of paper so we could compare our results at the end of the experiment.

Then I had them carefully pour 1/4 cup water into four different clear glasses.  Finally, they added the candy to the glasses and we labeled them. 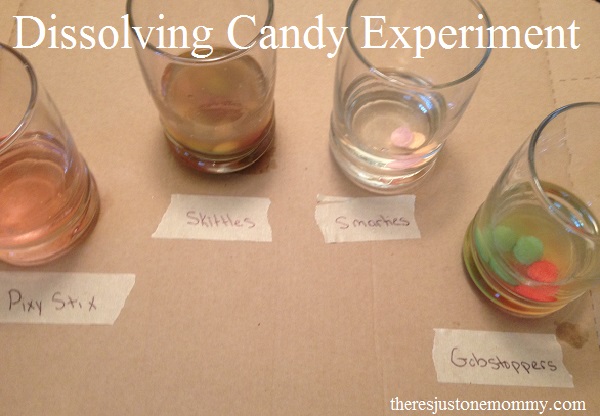 The Pixy Stix dissolved in 7 seconds, with a little stirring. 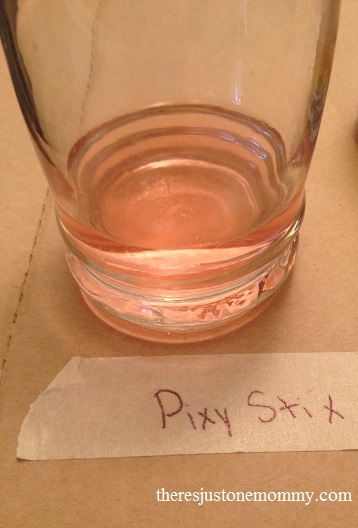 We discovered the Smarties took quite a bit longer than expected; they actually took an hour to completely dissolve, not just 5 minutes.

The Skittles took an hour and 20 minutes; the Gobstoppers took 2 hours!

Even though their predictions were a bit off when it came to how long it might take, I was impressed that they were right in which order the candies would dissolve.

If you want to take it a bit further you could set up the experiment to test ways to make the candy dissolve faster. (How does hot water affect the candy versus room temperature water?  What about different liquids, like vinegar?  Will crushing the candy ahead of time help speed up the process?)

For more candy experiments check out our Candy Heart Experiment!