My daughter loves fairies.  When I found this super cute Pinkalicious: Fairy House

book at the library, I knew my daughter would love it.  And I knew we would soon be doing our own fairy craft and building a garden fairy house of our own. 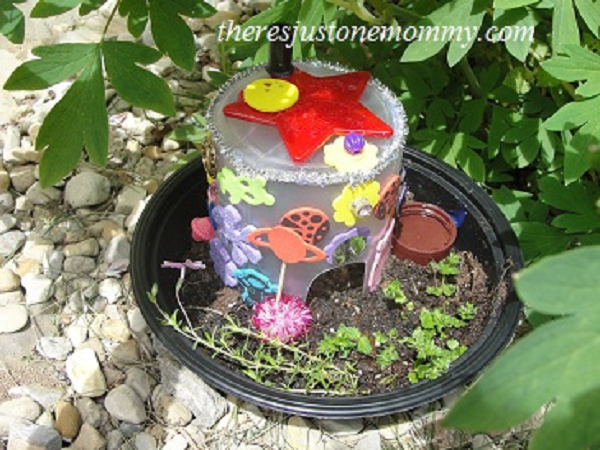 We decided to check the recyclables box for materials for our fairy houses.   I found some large carry-out plates that I thought would be fun to put the fairy house in, that way the fairies could have their very own garden!  My daughter found some other plastic containers to use for the actual fairy houses.  Then we pulled out the craft supplies, looking for odds and ends to decorate with. 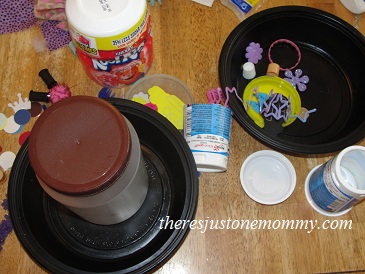 Once he heard we were making fairy houses for the garden, my son decided he wanted to join in the fun, but his house was going to be a beetle house.  (He loves beetles!)

I cut the bottoms of the yogurt containers off and hot glued them to the top for roofs.  I also cut doors in the containers, all the while they hunted for just the right objects to decorate with.

My daughter came up with some adorable ideas for inside the fairy house! (I hot glued them to the sides of the house so they would stay put.) 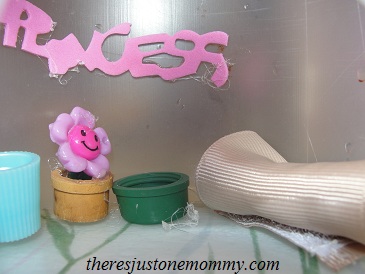 The back wall has a princess sticker. A ribbon wrapped around cotton made a nice bed. And don’t you just love the flower bead on the cap there?

Since we were using the hot glue gun, I took turns with the preschoolers, asking them where to glue each item to their houses.

My youngest decided his beetle houses needed some fun spaceship signs, so we stuck the foam stickers on toothpicks. 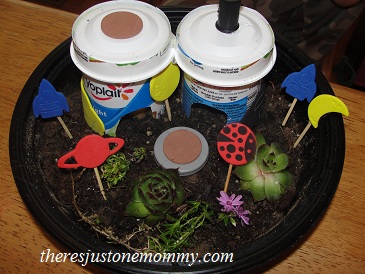 Then we went outside, added some potting soil and a few hen and chicken plants and got it all set up. 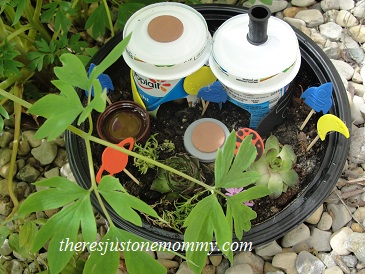 A nice, shady spot beneath my bleeding heart bush was the perfect spot for a fairy house.

My oldest got very involved decorating her house — the fairies will be impressed! 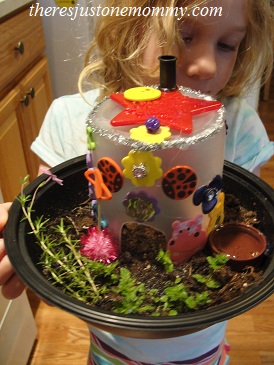 I have found her several times now just staring at her fairy home, waiting for the fairies to arrive…