Tonight, like we do many Sunday evenings, we ate dinner next door at Mamaw and Papaw’s house.  After dinner Papaw was giving our daughter a ride on his shoulders.

Somehow the subject of hair came up.  (Papaw is bald.)  He mentioned that he used to have blonde hair like hers.  And he told her he used to wear it in a ponytail.

“I used to be an old hippie,” he laughed.

The look on Peanut’s face as we all laughed was priceless.   Even better was when she threw her hands out to the side and said, “I don’t get it.” 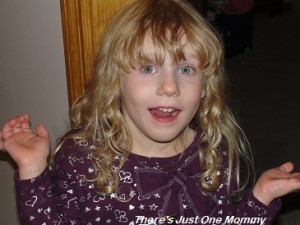 Before we left there was a little issue over some toys that OneDaddy’s brother was packing up to take home with him.  When Peanut realized her daddy  wanted some of them, she said, “It’s okay, Daddy, you can play with some of my princess dolls instead.”

What have your kids said lately to make you smile?