My son has never been a solid sleeper.  Lately, he has also taken up the toddler/preschooler art of stalling at bedtime.

The other day as I tucked him into bed he told me, “Don’t like my bed…It’s too rusty.”

His bed is wood – I’m assuming he chose the word rusty because it’s brown.  When I pointed out the fact that his bed is wooden and not “rusty,” he said, “Don’t want a wood bed.  I want a p’astic (plastic) one!”

I got a kick out of that one, and thought all the funny was done for the night.

But it got even better.

His eyelids were growing heavy as I sang his lullaby.  That’s when he started poking my arm.

I probably shouldn’t have said anything, but I acknowledged him and told him, “Rubies are a red stone.”

“Yes,” I said and returned to singing.   Of course, by then he was starting to get his second wind.

“Where are they?” he asked.

I told them they were under my shirt, to which he said he wanted to see them.

Yes, I should have ignored ‘uubies from the start….

But, then I had to ask him why he wanted to see them… To which he replied, “I love boobies!”

I admit it, I had to lay my head down on the bed so he wouldn’t see me laughing. 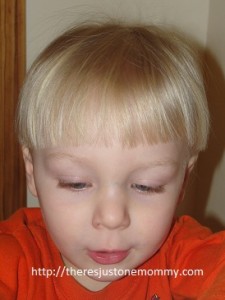 What funny things have your little ones said at bedtime?