“Call your Aunt C.; the doctor said to take him to the E.R.,” I told my husband as I held our son close.

This was following 3 sleepless nights.  The first 2 nights I thought were linked to thunderstorms that had passed through the area.  But that night?  It was like watching a caged animal fight to get out.  He would sleep for a short time and then wake, crying, quickly turning to screaming, as he tossed, turned and kicked.

The only thing I could get out of him was, “Head!  Head hurt!”

We were ready to go in record time, and when Aunt C. got here to stay with our oldest child, we headed off to the hospital.

I could write a post on how helpless I felt watching my little one suffer.  Or I could write about the questions and fears that go through your mind as you drive towards the E.R. with your little one in the back seat. 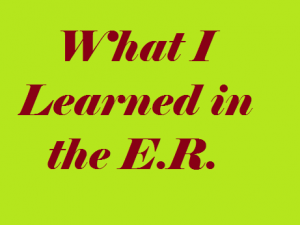 Those are topics so many of you could probably relate to.

But what really sticks in my mind is my son.

The child who freaked out when we had a different nurse one time at the doctor’s office and I hadn’t known to prep him in time.

The little boy who has run away crying when other kids sat down at the table he had been sitting alone at.

The one who doesn’t want to sit on the rug with the other kids at library story time, who refuses to sing or do the dancing/hand motions if other kids are there.

He sat on the hospital bed, cuddling what he calls his “snuggie,” and he didn’t cry.  He didn’t beg me to hold him.

He watched the nurses with his big blue eyes, and he answered their questions, quietly at first, but he answered.  Before I knew it, he was even making conversation with them!  They asked about his head, and he started talking about how you have to be careful eating ice cream because you can get “freeze brain”.   (That’s what he calls it.)

At hospitals, you have different people coming in to your room, checking temperatures, asking insurance information…

My child who hates change, he sat there and took it all in without complaint.

Not only that, but he answered the questions so well that the doctor commented on how verbal he is.

We left the hospital with a prescription for what turned out to be a pretty good ear infection.  (One reason we headed to the E.R. instead of waiting for the doctor’s office to open is because he kept saying his ear didn’t hurt, and he didn’t have any other typical ear infection symptoms.)

But, really, I left with much more than just a prescription in my hand.  I left with some hope for my little guy.  What ever keeps him from interacting with his peers, what ever struggles there have been when he’s met change, today I saw a brave little boy and a part of my son I didn’t know existed.