Today’s Thankful Thursday post focuses on the hairiest member of our family.

8 years ago, on December 6th, Fluffybutt became a member of our family. (No, that’s not her real name, just the name I use on here to protect the innocent, or not-so-innocent.)

When my husband and I married that August, I moved into the farm country, away from the suburban life I had grown up in and was used to.  With no family and no friends nearby, life was pretty lonely when I came home from work and the husband was working late.

Growing up I had a cat, but since the husband is very allergic to cats, I had left her with my parents (well, that, and she was really attached to my dad).  I decided a dog was the answer.

I tried animal shelters in the area, finding several dogs I was interested in, only to be turned down.  Why?  Because we did not have a fenced in yard.  (We’re talking farm country, acreage… NO ONE out here has a fenced in yard, but the shelter wouldn’t budge.)

Then I turned my search to the paper.  The beagles I considered at first were sold out before I even called.   We went to see sort of mixed-breed pups and went home to look up a little about their breeds – would they be good with kids, etc.  The next day, when we called, they were all gone.

Every possible pup turned into a heartbreak it seemed.

When I called, the lady was very helpful.   She told me the mother was a German Shepherd and Husky mix; the dad a Black Lab.  There were 13 pups in the litter.  (Shouldn’t that be a record?  Wow!)  Two pups were girls.  (I was hoping for a girl.)  She described both girls to me:  one was solid black and one was a mix of colors.

I was hoping the black one would be there still when my husband and I went to see the pups that night.  I looked up all the breeds in the dog breed book my husband had bought, marking the pages to show him later.

Then I gathered a small box, old towel, and stuffed animal to take with us.  I was NOT letting this pup get away – we’d be bringing her home that night.

Heading to check out the pups we got lost on a few back roads.  We wound up at a small farm.  Two girls in long dresses and bonnets met us at the truck.  When I asked about the black female pup we learned that someone had just picked her up.  Then the youngest little girl picked up the remaining female – holding her tummy out to show us she was indeed a girl dog. 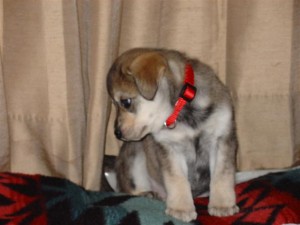 I held that little ball of fur close to me and asked my husband to get the money from my purse.  (Nope, I wasn’t even sitting her down to open my own purse.)

We took her home, stopping at the in-laws long enough to pick up the dog crate they had.  We let her run around the kitchen floor for a bit, and she started whining.

“What’s wrong with her?” my husband asked all concerned for our new pup.  We learned soon enough when she left a little yellow puddle behind.

And thus began our life with little Fluffybutt… 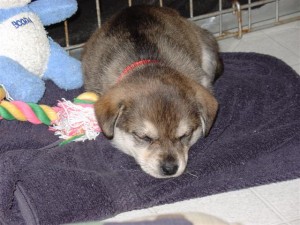 …who didn’t stay so little. 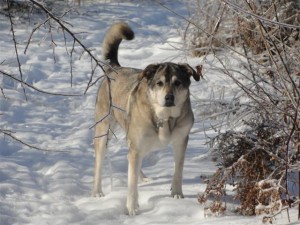 Sometimes God has a reason for all those struggles we go through.  Had we gotten a dog from the shelter we never would have found the perfect dog for us, and for that I am so thankful.

This post has been shared on Mama Kat’s Writer’s Workshop.