When it comes to winter weather, nothing gets kids smiling like snow.  And around here we have had plenty of it already, and it isn’t even officially winter yet!

But what do you do when the temperatures are just too cold to let the kids play outside?  (Or maybe one of them already has a cough that doesn’t end and you don’t want to aggravate it…)

Bring the snow inside! 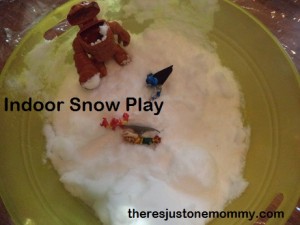 Today I decided to fill our large sensory tub with snow and set up a scene with some of the super hero figures.   I set it on the plastic ground cover we use for messy play, and then I called my preschooler to the kitchen.

We have played with snow inside before, but never this amount.  In the past it was just a few handfuls; I don’t think he knew how to react at first! 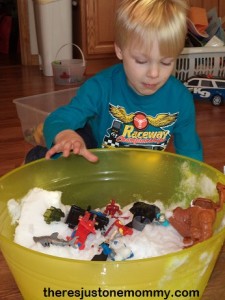 He proceeded to toss a few more super heroes into the snow, looking up every once in a while to see my reaction.

Then it was time to get down to business!

I helped him put on a pair of mittens, and a wintry super hero story started to unfold. 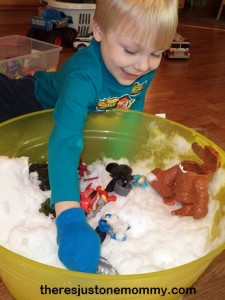 He had so much fun, I know we will be doing this again this year!

Have you had snow yet this year?  How have you been playing with it?