Christmas.  The decorations are in the stores before Halloween.  Thanksgiving seems to get lost in the ads and sales that are advertised each day on t.v. and in the paper.  To quote Lucy from the Charlie Brown Christmas special, “We all know that Christmas is a big commercial racket.”

That’s kind of how I felt about a certain elf I heard about last year…and that was before I saw it was 30 dollars to adopt the elf.  And then there was the whole kind of creepy factor…  I remember worrying that my baby dolls would get jealous when I picked one to take to my grandparents, so I made sure to have them take turns each week.  Kids can have quite the imagination; why add to it by having a toy that “moves on it own at night?”

And then the past month came and went, with the 5 year-old getting into my lotion, the toothpaste, the soap…taking the nail polish from the medicine cabinet, swiping the keys I had put up on the kitchen sink to keep out of her reach, scribbling on furniture…  And did I mention the 3 year-old?  Whoever called it the terrible two’s should have come up with something for the three’s…  We’ve had plenty of hot tempers and toys flying through the air.

I admit it, I was tempted by an easy answer.  I was looking for my own commercialized Christmas miracle to help keep the kids in line.

It was just a random search on Ebay, where I stumbled across an elf that had 15 minutes left for bidding, and was only 12 bucks.  (Not THE elf, but a magic one none the less….)  I was on the phone with my sister, who had just gotten such an elf for her own little almost 5 year-old terror, and I mentioned it in passing.

We chatted, and I decided I was going to make my first Ebay big.  There was a minute left…  That’s when my sister asked if I was logged in.  Huh?

Next thing I knew she had put in a bid and won the darn thing and was having it shipped to our house.

That’s when I realized what I had just done.

It seemed wrong to just leave Eli in the envelope he arrived in.  I debated just having him appear for St. Nick Night just as another Christmas decoration for the kids to play with.

It was close to midnight when he found his place on the wood stove and I climbed into bed, still wrestling with what to do with the notorious elf. 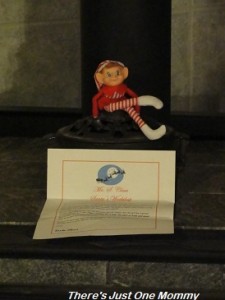 Morning person that she is, my daughter bounded from her bed in the morning.  “We have an elf on the shelf!” she cried in glee.

Still trying to wipe the sleep from my eyes, I asked her how she knew what it was.  After all, she doesn’t go to preschool or daycare where other kids may have mentioned them…  She looked at me like I was stupid and then said, “I heard you talk about it once.”  (Kids are always listening!)

I read them the letter that accompanied the elf.  There were tons of questions, which I wasn’t really sure how I wanted to answer.  And that was it.

Until I caught her later that evening, showing the elf a picture of her and Santa from the year before…

So, now we have an elf.  At least it’s just for a couple weeks.  And then I have a whole year to struggle with whether or not the thing comes back.

Maybe next year I’ll be strong.

(Want to see what happened the next day?  Read this post.)

Shared on Things I Can’t Say