When the UPS truck pays us a visit, everyone gets excited.  The dog goes bonkers; the kids jump up and down, anxious to see what’s in the box…  Usually it’s something Daddy has ordered for his motorcycle, or more recently it’s motorcycle gear for me.

This week the kids had every right to get excited, because this week the truck brought us a VTech Go! Go! Smart Wheels Train Station Playset.  (I received our playset from VTech in exchange for writing my honest review.) 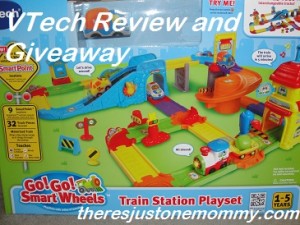 My vehicle-loving 4 year old could not wait to get that box open!  And when he found out the train made noises and played music?  His fingers were digging in that package non-stop while I tried to get it open as quickly as I could. 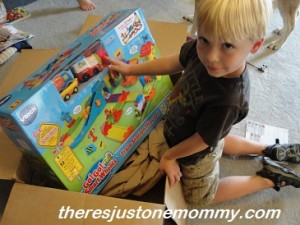 There are 32 interchangeable track pieces that can be combined in various ways for the motorized train engine and cargo car to travel.  Thankfully VTech included a sheet with 5 different ways to set up the track.  This made it easy for me to get it up and running quickly, which was important since I had two anxious kids just itching to try it out!

At first my son wanted to manually push the train around the track.  What is great is that you can turn the train on and it will sing and respond to the 9 SmartPoint locations that are located along the track while you push it.

The other part I loved to see?

My 2 kids cooperating while they played!  While the 4 year-old pushed the train, the 5 year-old worked the conveyor belt to pull it up the hill. 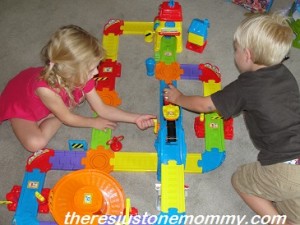 Once he had pushed the train around the track a couple times, he decided to push the button on the train’s funnel and let it chug along the track on its own.

They enjoyed listening to the different phrases and sound effects the train made as it crossed each of the SmartPoint locations.

They also had fun putting the gates down for the train to bump into, watching it race down the spiral, and checking out all the buttons on the train station.  My son played with it almost non-stop that day for the next 4 hours.

I asked him what his favorite part of the set was.  Here was his response, “I like the thing you crank up (the hill) and the swirly part (spiral track piece).”

When I asked him if there was anything else he liked about it, he immediately said, “The train!  It sings songs!”

Already have another VTech Go! Go! Smart Wheels Playset?  The train’s track connects to other sets, allowing kids to further explore their creativity.

The VTech Go! Go! Smart Wheels Playset is geared for ages 1-5, making it the perfect gift for any vehicle-loving toddler or preschooler this holiday season.  (I think it would be ideal for the 2-4 range; I can definitely see where a 5 year-old would outgrow it quickly.)

As stated previously, this has been a sponsored post written on behalf of VTech.  All opinions are 100% my own.