I’ve been trying to get my little preschoolers outside for a bit before the real heat of the day hits, which means pretty much we go out right after breakfast or we’re not going out at all.  (And yes, I’ve been out there in my jammies, people – thank goodness for the country life!)

Even with going out early, it’s still been pretty hot and sticky, so I decided a little ice would help cool things off.   Using a small plastic container I froze about an inch of water with blueberries scattered in it.  Once it was frozen I added another inch of water and some green and red grapes.  I repeated the layers until I had a nice block of ice. 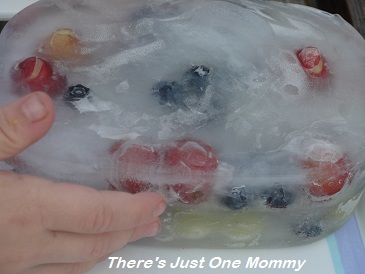 We talked about how the berries were frozen in the ice block and brainstormed ways that would make the ice melt faster.  After playing with it a bit, we let it sit.  After 15 minutes or so we came back and examined the puddle of water that was starting to form beneath the ice.  They both were able to wiggle a blueberry out…which thrilled my son to no end.

Alas, it was one of those over 100 days and it was already getting too hot to stay out much longer, so we took our ice inside and tried some of our brainstorming techniques to thaw out the ice.

I filled a large bowl with cool water and asked them if they thought the ice would float or sink.  Then we gave it a try…

My daughter noticed that the water kept getting colder and colder as the ice slowly melted.  Perfect time to talk about the effect ice has on our drinks…  Then little brother noticed the ice was melting faster and the berries were escaping  and he started getting super excited… 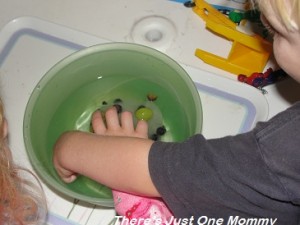 When Peanut decided she’d speed up the process by putting the ice between 2 plates and using a little magic…. 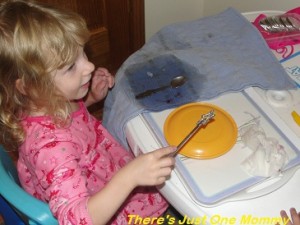 Thankfully it looks like this week we might go back to our normal temps for this time of year. (Mid and upper 80’s are sounding really good right now!)

What’s your trick for staying cool?