Are your kids getting as stir crazy as mine are lately?

The weather, people being sick, trying to stay away from people who are sick…  It’s been keeping us home a bit more than usual, and let’s just say some days the house is NOT big enough for me and the two kids.

Some times you just need something new and different to break up the monotony.

A couple days ago I brought up two of the empty Christmas wrapping paper tubes and left them in the living room.  They have been used as super long telescopes, pretend stilts, and for a brief period, swords.  Of course, eventually I found them doing something like this with them: 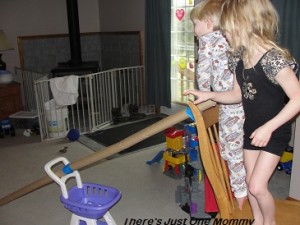 I helped them out a bit with some duct tape and the use of the toy shopping cart for support, and they spent a good 30 minutes just sending car after car down the tunnel.

When that got boring, we put a box at the end to see how many cars they could each get to land in the box.

Then next day, while they were playing downstairs, I decided to take it to a whole new level.

I cut a slit in the tubes and used some masking tape to adhere the tubes to the space where the stairs meet the wall.  (The slit was to make getting any stuck cars easier to get out and I chose masking tape so it wouldn’t damage the paint.)  Once I saw that my idea was going to work, I grabbed one more tube and cut it in half length-wise, enabling our “track” to go the full length of the stairs.

I have to say this simple idea was a huge hit with both of them!

They spent a long time sending car after car down the stairs to the folded towel “landing zone” at the bottom.

Since the tube really isn’t taking up any walking space on our stairs, I’ve decided to leave it up for a while.  Who knows, it might get jazzed up with some color or paper flames.  I’m even toying with creating a fun way to bring the cars back up the stairs….

Have you tried anything new to keep the kids busy lately?

Shared on Milk and Cuddles,