, you know, the snail that becomes super fast.   The idea of a snail racing cars had him tickled, and even though he hadn’t gotten to see the movie in the theater, we had read the picture book from the library and he talked about it constantly.

The movie wasn’t out on video yet, but they had the soundtrack at the library, so I picked it up for us to listen to in the car.

The music is not really my type, but that didn’t bother me too much.  What bothered me is that a soundtrack for a children’s movie contains music that isn’t appropriate for children. 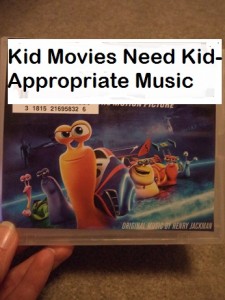 Okay, so they bleeped out the N-word on the movie soundtrack.  But really, is the rest of it anything you want your young children listening to?  I don’t want to have to explain what a pimp is to my preschooler.   And the derogatory slang for a police officer doesn’t make me much happier.

We hadn’t seen the movie before, but I didn’t think I’d have to preview the soundtrack to a kid’s movie before playing it for my kids in the car.  This is a movie geared towards preschoolers and early elementary aged children!

I was trying to reach the button so the CD would skip to the next song when I heard:

I keep a blue flag hanging out my backside
But only on the left side, yeah that’s the  C– side

Once again, they had bleeped out the word Crip, but seriously!  Do you want your children listening to a song full of gang references?

And don’t think that little kids can’t understand the words when they sing them so fast!  When I hit the wrong button and just forwarded the song ahead instead of hitting the skip button, we heard:

See I specialize in making all the girls get naked

“Mommy, why are the girls all getting naked?” asked my 6 year-old daughter from the backseat.

Yep, this is exactly the song I want my young, impressionable children listening to.  NOT!

I have to question why they would include such a song on a kid’s movie to begin with.  There HAS to be better songs that they could choose from.  When I looked up the song’s lyrics online, I was floored!  The entire song is inappropriate for kids.  (Look it up yourself and see what I mean!)

I’m disappointed, DreamWorks.  As parents we shouldn’t have to worry about what songs our kids might hear in a kid’s movie or on the movie soundtrack.