Like so many preschool boys, my son is obsessed with vehicles.  That’s exactly why I decided to do our vehicle-themed learning activities for homeschool preschool.

We started off with “A” is for ambulance, and have continued the alphabet, with a new vehicle for each letter. 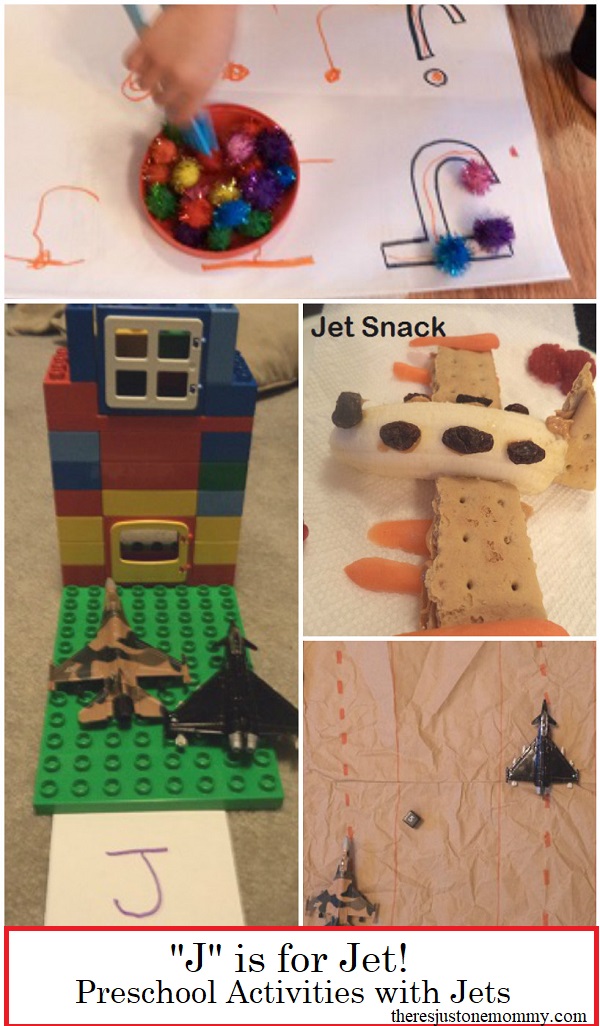 Affiliate links have been used below.  See my full disclosure here.

Take the flying fun even further and make your own jet packs to help your preschooler’s imagination soar!

We’ve done enough different vehicle activities that this time my preschooler played a big part in planning our day.  I love that he wanted to take a little control over which activities we did.

I like to start our activities out by doing a little practice with recognizing the capital and lower case letter and writing it as well.  This time around we decided to use objects to help form the letter “J.”

I made a capital and lower case letter J on a large sheet of paper.  Then I got out a few items to make our J’s with.

The first item he used were sparkly pom-poms.  He used a pair of tongs to transfer the pom-poms to the paper.  (Working on some life skills and fine motor development all while learning about the letter J!) 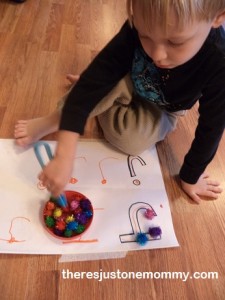 Next he used some beads to form the letter.  Picking up each of the small beads was a great way to work on hand muscles and fine motor skills.

Our next activity was a math game. 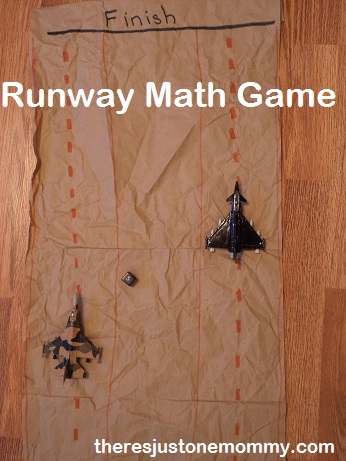 Making the game is really easy.  I used a long piece of packing paper to create a couple runways for our toy jets to land on.   I marked the finish line at top.  Then I used and orange marker to create “lights” to help guide our jets to the finish line.  Make sure you have the same number of orange lights on each runway!

We took turns rolling a game die and moving our jets up the correct number of lights, putting the jet’s nose on the correct mark until the winner crossed the finish line.

Then it was time for the activity the preschooler was begging for.

He LOVED following the letter “F” to put out the fire when we did F Is for Firetruck.  He was itching to do that activity again, this time using the letter “J,” of course.

Using sticky notes, I wrote both capital and lower case letter “J” to make our path, throwing in some other letters to create wrong paths and make it more of a challenge.

The path went from his room, down the hall, and through the house to land at the airport made of Lego blocks. 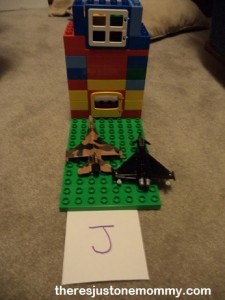 He asked to do the activity over and over again.  (4 times!)  I’d say this was the biggest hit of the day.

By that time it was time to get a little something to eat.  And, of course, he wanted a jet…. 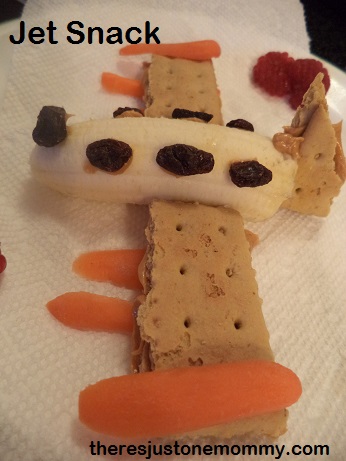 Want to make your own jet snack?

I started with half a banana.  I spread a bit of peanut butter on graham cracker halves, topping them with another graham cracker to make wings, and then formed a piece into the tail as well.

Raisins, with a bit of peanut butter to make them stick became windows.  Carrot sticks became guns on the wings.  (He wanted an Air Force jet.)  (The smashed raspberry in the background was his idea for a cloud.)