Last year, for my daughter’s 3rd birthday, I made this sparkly, pink princess castle cake: 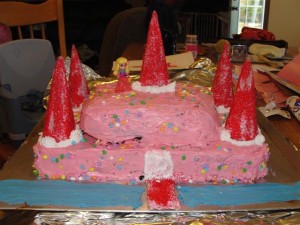 I was all set to make the same cake this year when she turned 4, but then she told me she wanted a sand castle cake.

No problem, I Googled for ideas and found some cute round sand castle cakes to get ideas from.  Then she told me that was NOT what she wanted; she wanted a square one like she and Daddy made in Florida…  Of course she told me this right before I started baking and I already had done the shopping for the cake ingredients.

So there I was, the night before her 4th birthday party, trying to make the perfect cake…

I started off with a 13X9 inch chocolate cake. (I used a super moist cake mix, which I later decided wasn’t the best idea b/c it crumbled a lot as I iced it.)

I cut out a smaller rectangle out of the middle, dividing it into sections to build the cake taller on the sides later. 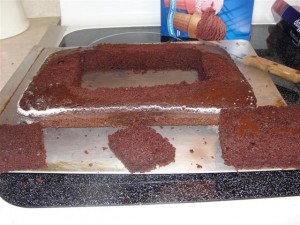 I used a serrated knife to make the top sections flat enough to build up with a second layer.  Then I put a little icing on those sections and put the second layer on top.  I had bought pink colored ice cream cones that I made small holes in the corners of the cake and squished them down so they’d stay. 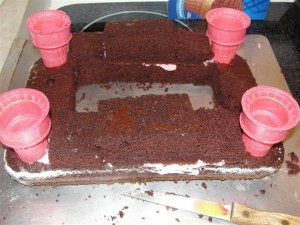 Then I started putting the icing on the cake – pink, of course!  (Even though she wanted a sand castle, she insisted it be pink still.)

As I put on the icing, it became apparent really fast that I really needed more than one can of icing to make a cake like this, with the center cut out and needing iced.  (Again, when I went to the store I was envisioning a different cake design…) 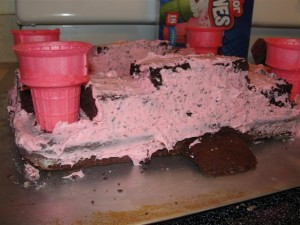 I used a very, very small amount of icing on each of 4 pointed ice cream cones and then sprinkled them with dark pink sugar crystals.  (Got to make it sparkly for a 4 year old!) Then I used a few dabs of decorator icing on the bottom of each cone to secure them to the insides of the 4 already placed ice cream cones.  These were now the towers at each of the 4 corners of the sand castle. 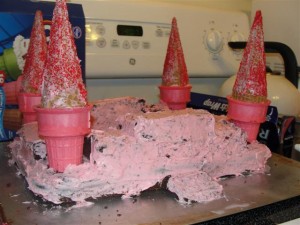 Since I was out of icing and there was patches of cake showing through, I had to get a little creative.  I had bought a package of Disney mermaids to use on her cake, so I dug them out of hiding.  I lucked out b/c the package had some cute decorations (Flounder and Sebastian together and some seaweed) which I could also use.

I also decided to use some seashells we had from our vacation.  A couple shells here, a cardboard cut out there… I worked to cover up the bare places on the cake. 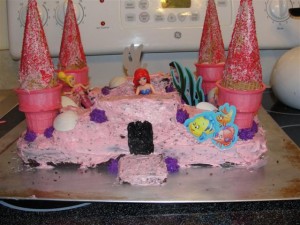 Finally, I decided it needed something around it -sand, of course!   I crushed up several graham crackers, ran a little decorating icing along the cookie sheet since it has no sides (I was trying to make the “sand” stick and not fall off), and sprinkled on the graham cracker crumbs.  I put some inside the open are of the cake, too. 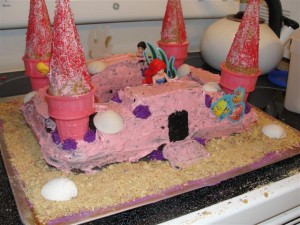 The whole thing took me a little over an hour to decorate.  Then I had to carefully cover it with foil to keep the dog hair off over night (no easy feat, by the way).

But I’d do it all again just to see her face when she first saw her cake!

Have any great cake designs you’ve made for your little ones?