My husband likes to joke about the last few months of the year and “Hallo-Thanks-Mas” – where it seems the stores rush the holidays with Christmas items being out before Halloween.  Truly it seems you end one holiday and begin preparing for the next.

That being said, with Thanksgiving leftovers being almost gone, the kids and I have begun to prepare for Christmas.

I’ve learned that 2 year olds do not deal well with change; the key is to go slowly.  And things had to change, because there was no room for the Christmas tree unless we rearranged some toys in the living room.  The biggest challenge was the fact that Monkey’s cars and trucks had been living in the corner where the tree goes.  And NOBODY messes with his vehicles.

For several days I talked about how we were going to have to move his cars and trucks to make room for the tree.  His response?  He’d point to the kitchen and tell me to put the tree there.  Fearing a huge upset, I opted not to move any toys out of the room (like I had originally hoped).  Instead I moved the storage units we have toys in to the space right behind the front door.

This freed up some space between the play kitchen and tool bench, just 6 or so feet from where the vehicles usually reside.  Even so, the two year old was NOT a happy camper when I started moving his stuff.  Thankfully, when I suggested he might like to help me, he started picking up his trucks ever so carefully for the move.

At least we had a space now for the tree… 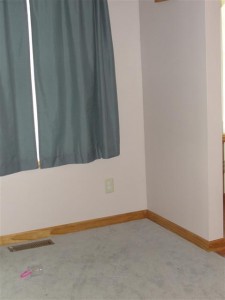 Knowing I better fill it before the kids did, we got right to work!  With two little helpers handing the husband and I branches (color coded, so it was like a scavenger hunt for them), we had the tree up in no time! 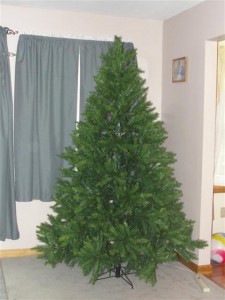 I’m leaving the tree as is for a day before we decorate so the toddler can get used to it.   (And, of course, when we do decorate it, only the ornaments in the toddler-friendly category will go at the bottom.)

Have you gotten any holiday prep. done yet?