I haven’t written a Manic Monday post in a long time.  Not because my kids became perfect angels one day, just because I was focussing on other things.

But I am one for irony… You see, I just shared this past Manic Monday post with some bloggy friends.  I smiled as I remembered that day and the things that would sometimes happen when I was in the shower, until I discovered my magic shower combination, that is.

And then this weekend happened.

Being a little older now, there are times I leave the kids playing in the living room while I take my quick shower.  I usually leave them with, “No hitting, biting, screaming, or fighting…”  And usually things go fine.  Yes, sometimes I step out and they can’t wait to tell me what the other one did.  And once my daughter greeted me with a comb she had twirled and gotten stuck in her hair.  But these past few months I haven’t stepped out of the shower to face a mess.  So I wasn’t expecting what happened when I jumped in the shower while my husband was picking up a few things outside…

I was just stepping out of the shower when my husband poked his head in the bathroom and said, “Oh, you’re done?  I was hoping we could stick this one in there with you.”

I grabbed my glasses (because I can’t see two inches from my face without them) to see what he was talking about.  There was my son, covered with powdered chocolatey goodness.  “Chocolate!” he said, grinning at me. 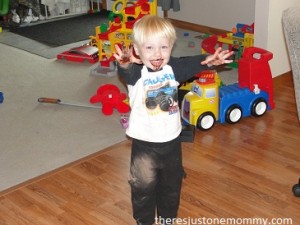 That’s when his big sister ran in to show me that the bottoms of her feet were covered in chocolate.  (Yes, she had just ran through the carpeted living room and hallway, leaving little footprints in her wake.)

Evidently they had found the Ovaltine in the cabinet.  And evidently, now that they are older (and bigger and stronger), they can now open the Ovaltine container.  (This is why as a parent, child-proofing is NEVER finished.  They just keep getting stronger and smarter!)

Of course, I had to have my husband grab the camera and snap a picture of my little guy before I tossed him and his big sister in the tub.  (After all, have to have some proof of his mischievousness when he’s older.)  Then I set about wiping chocolate finger prints from the walls and little footprints from the floors. 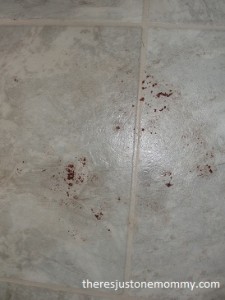 Sounded good, so I made myself a glass of chocolate milk and put the Ovaltine container in a higher cabinet.  Pretty soon my bottom cabinet will be empty. 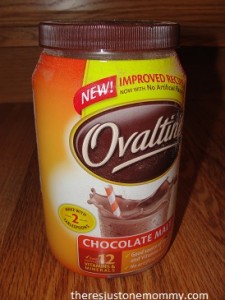 What funny things have happened when you’ve tried to get a shower with little ones running about?