These two words are guaranteed to send my kids racing my way.  Sometimes I have planned craft, like water bottle fireflies or super cool pet rocks.  Sometimes it is more an open-ended craft set up where I pull out markers, crayons, stickers, various shapes cut out of colored paper, glue sticks, etc.

Today I had some of those long sheets of packing paper and crayons.  The idea was to draw a mural.

We talked about what a mural was, and then it was time to get down to business! 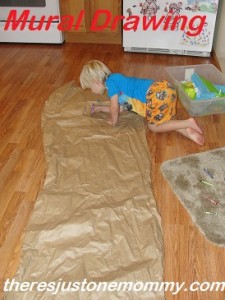 My little guy knew right away what he wanted to draw: cars!  (And a few trucks and boats for good measure…)

After a while I suggested some other items he might like to include on the mural.  He added a sunshine, a few clouds, and some trees.

Originally I thought we’d hang them on the wall in the garage.  (One of the few places with an empty wall long enough for the paper we were using.)

But, like so often, the kid idea was so much more fun! 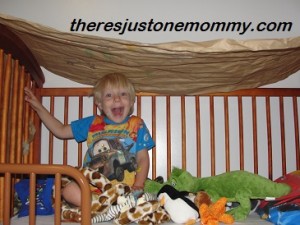 I NEVER would have thought of this!

He loves his “shady spot” on his bed.  It was the perfect place to snuggle and take care of the stuffed babies for a while this morning.

And he loves seeing his artwork whenever he looks up! 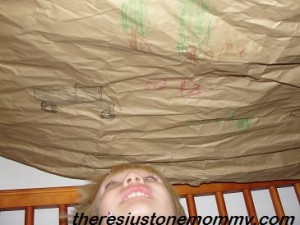 I love when their creativity takes over!