Crafts are a fun way to help make history come alive for kids.

During our study of American history, we’ve had fun with lots of crafts, including a few Mayflower crafts when the kids were little and we discussed the first settlers.

When it comes to teaching kids about the early history of America, it is impossible to do it without mentioning the people who were living here long before the settlers came.  The month of November is especially popular for teachers and parents to search for Native American Crafts for Kids. 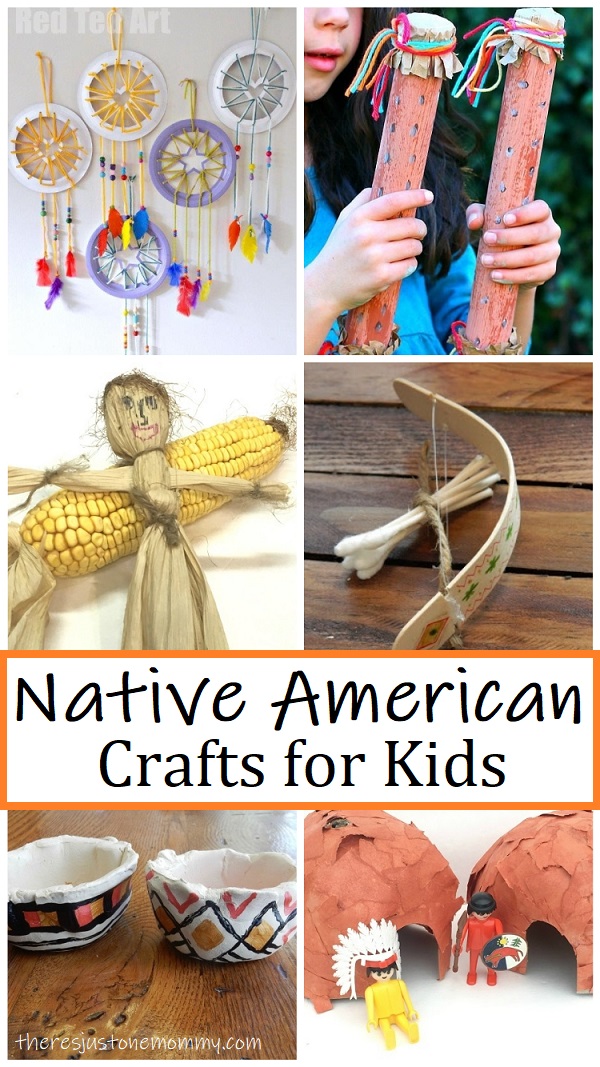 Before going any further, I want to stress that these are crafts for children.  That being said, crafts are a wonderful tool to help children become more familiar with other cultures and be excited to learn about them.

While it may be tempting to choose a few crafts at random and use them at Thanksgiving time or as a general craft, this does a disservice to both the kids and the cultures being represented.

Different Native American tribes had different cultures, and it is important for children to understand this. For one, not all of them lived in teepees.  (A stereotype so often depicted when early grades do Thanksgiving crafts.)

Before crafting, take time to discuss the similarities and differences between tribes, and choose activities that best represent the group you are studying.

Native Americans for Kids & Teachers  is a website that is written in simple language that is easy for even the youngest learners to understand.  It does a nice job of giving a brief overview of many of the different cultures of the people native to the Americas.  Kids can discover the types of homes that were used, some of the traditions, and get a glimpse of how life was different for each group.

You may also want to check out this list of Native American Books for Kids.    While many children’s books seem to stereotype different cultures, the books in this selection help depict a portion of their rich history and show some of their many contributions to American history.

Model of a Wigwam —  Wigwams (or birchbark houses) were used by several groups of Native Americans, including the Wampanoag tribesmen that were part of the First Thanksgiving.   This miniature version would be fun to make after discussing the process used to build these homes.

Corn Husk Dolls  —  These simple dolls were made by a number of tribes.   They even showed settlers how to make the dolls, and not waste any part of the corn plant.

Rainstick —   Kids will love decorating and using their rainstick to make music while exploring the various sounds created by the different materials placed inside the tubes.

Paper Plate Dream Catcher  —  Traditionally grandparents from the Ojibwa (Chippewa) would weave dream catchers to hang over a sleeping baby.  For older children you can find instructions for weaving these out of grapevines, in a more traditional manner.  This paper plate version is simplified.

Beaded Indian Corn — These adorable ears of corn are easy to put together and would make a nice Thanksgiving craft.   Not only are they cute, but they are colorful and very inexpensive to make.

Woven Basket — Woven baskets were used by most Native Americans and were made with natural materials they found near where they lived.  Creating a woven basket takes a lot of patience and skill.  Using a paper plate as a base makes creating this colorful and simplified version of a woven basket easy enough for kids to do on their own.

Faux Leather  Mini Teepee — This simple craft would be an excellent way to start discussing how different tribes lived in different homes and had different cultures.

Craft Stick Bow and Arrows —  Tweens will have fun making their very own miniature bow that can actually shoot!   With a few simple arrows made with Q-Tips, they’ll be able to shoot mini targets and test out their accuracy.

Pueblo Pottery —  Start by looking at pictures of some of the beautiful pottery the Pueblo are known for.  Then give children the opportunity to try making their own small bowls. 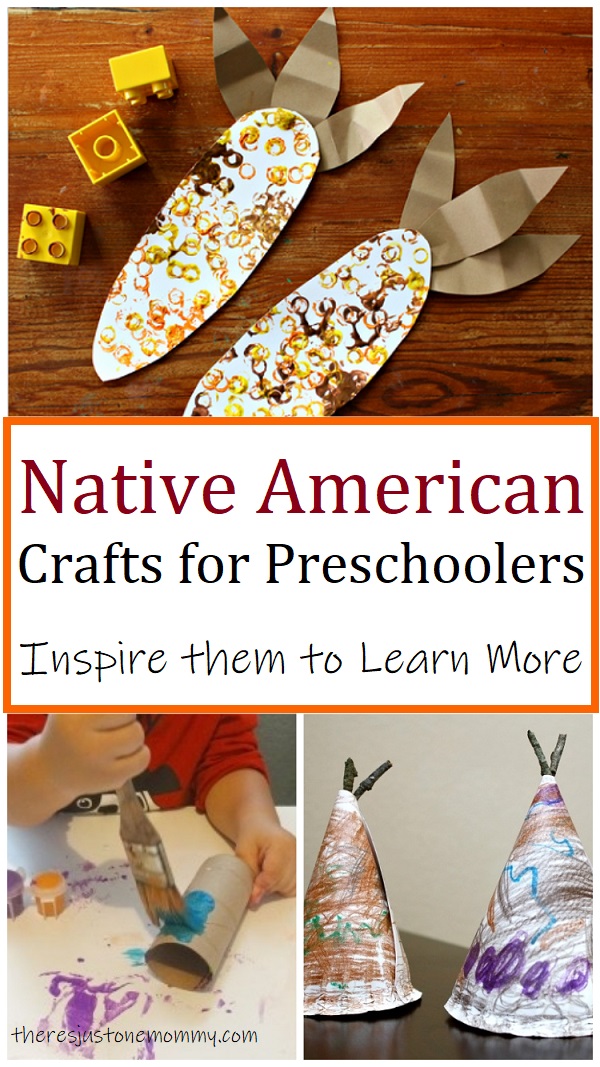 Crafts that deal with fancy headdresses, like making headbands with feathers to wear or “handprint Indians” where you turn the fingers into a feather headband, can be considered culturally insensitive.

In many tribes the feathers on a headdress were sacred.  They were worn by warriors and chiefs, and were a sign of bravery and honor.

Skip crafts that have kids dressing up or leave them to think that all Native people wore feathers.

The folowing are a few preschooler Native American crafts that will still get young kids excited to learn about American Indians.

Lego Stamped Indian Corn  —   Corn originated in the Americas.  Native Americans taught early settlers how to plant and grow the crop, making this colorful craft a fun one for little ones studying the first Thanksgiving.  Toddlers and preschoolers will have fun with this unusual painting technique.

Paper Plate Teepee  —   Many of the Plains People used teepees (or tipis) as they were able to take them down and move with them.  While building a life-size teepee may be impossible to do with your child, it is fun to research how they were built.  Afterwards, young learners can turn a paper plate into a quick and easy teepee.  The craft may even inspire them to want to learn more.

Cardboard Tube Canoe  —  With a bit of tape and imagination, toddlers and preschoolers can turn a simple cardboard tube into a mini canoe.  Then you can talk about the work that was involved in making a real canoe.

Cherokee Rattle  —  Music and chanting are central to many Cherokee ceremonies.   Preschoolers will have fun creating their very own instrument with materials you already have at home. 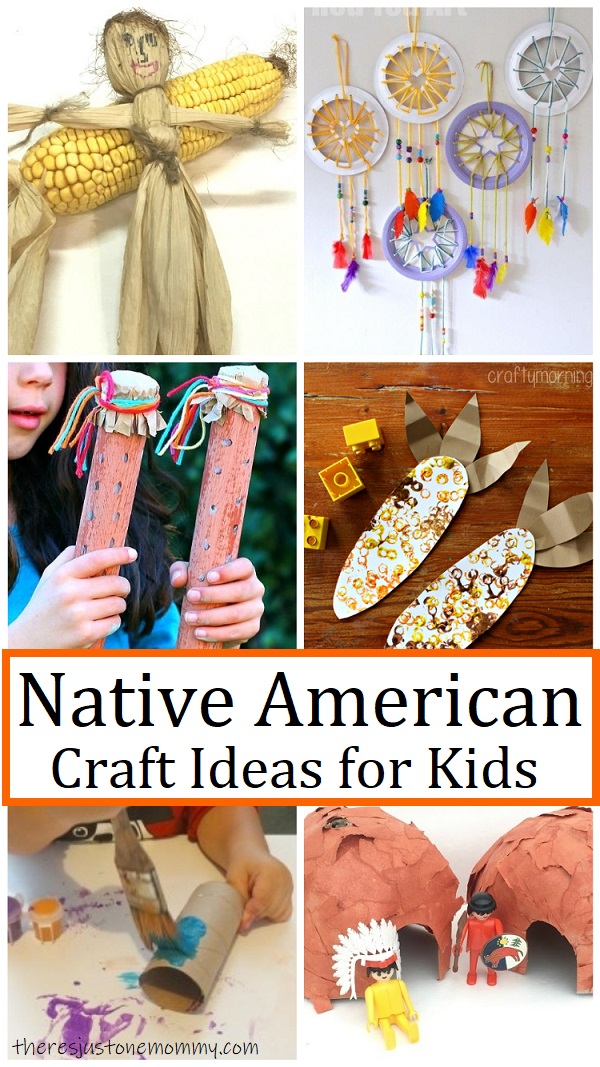