If you have read my blog for any length of time, you might remember my answer to having a downstairs play area for the kids to romp in.   I actually made the walls for that play area when my son was still crawling.  Now that he is 2 and both of their interests have grown a little, I wanted to update a few of the walls.

They both love Dora and Diego (they watch it at Mamaw’s and on video from the library since we just have regular old t.v.), so I decided to create a Dora and Diego adventure for them.  Since my daughter is also into princesses, I thought I’d throw in a castle, too…

So I gathered all the boxes I had saved up; I even had the box from Monkey’s new car seat still…which worked great in my plan!  I looked through my gift bags, printed a few pics of Dora and Diego off the Internet (because let’s face it, I can’t draw them as good as the pics I can find look), and found a few more odds and ends to use to decorate…

First I removed the walls I wanted to replace; this was easy since they are held together mostly with duct tape.  Then I planned the layout of the new walls.  I decided to use the car seat box to make a “cave” for them to crawl through. 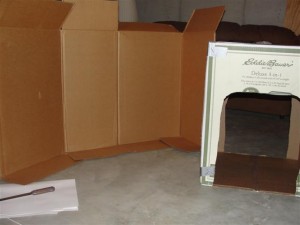 After I had the new boxes duct taped to the floor and each other, I set about decorating them.  I used a silver gift bag to make a “waterfall” inside the “cave” and put Diego and Swiper the Fox on the opposite wall inside it.  I used the back side of some large poster calendars that Papaw had given the kids to color on and covered the car seat box so I could decorate the outside with Dora and Diego. 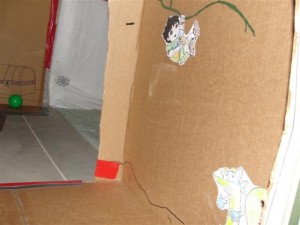 In the castle area I cut the top of the wall to look more like a castle.  I used the back of some fancy silver-paper calendar (another gift from Papaw) to make a mirror on the corner of the castle walls.  It gave it a fun house mirror effect.  I also used a couple very strong cardboard tubes (they had housed the large calendars) to make “ball drops” for the kids to drop balls and small toys through.  I just used wire ties to connect them to the cardboard walls.  Doing it at the corner of two walls actually strengthened the support between them. 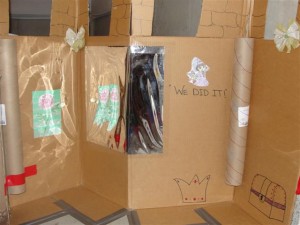 Finally I decided to make another wheel, this time with Dora’s backpack in the middle and items that might be in it, with pictures on the wall to match items to.  Kind of like a “If it’s raining, what does Dora need from her backpack?” kind of question area. 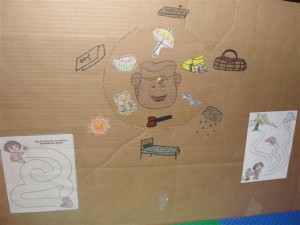 I was all finished, when I showed my husband and he said, “Aren’t you going to wall in the rest of the castle?”

Sigh.  I knew he was right, they’d love it even more if they could “hide” in the castle.  So I found one more box… and some more pictures from a few gift bags and got to work. 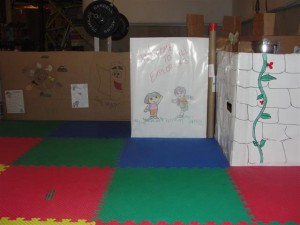 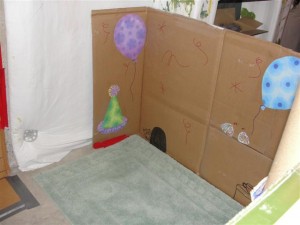 Inside the new castle wall

When they finally got to see it, the kids did love the castle!  And I love that they have a new play area that didn’t cost me anything but a little time! 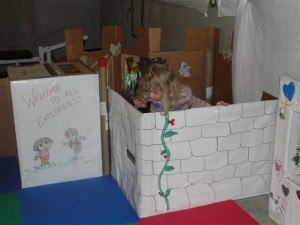