If you recall, we got our son a pirate ship for his birthday, and it’s been a big hit!  So when the husband and I were out at my favorite Target and discovered all the pirate items in the dollar area, we had a field day!

I began planning a “pirate day” then and there! 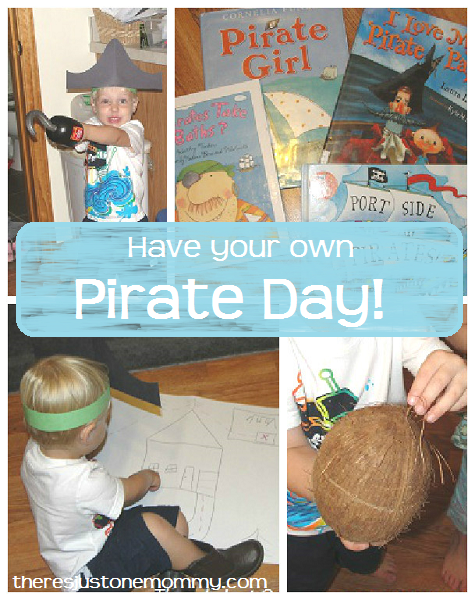 We prepped for our day with some great pirate books from the library. 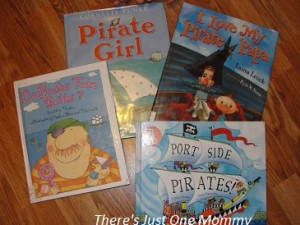 – including a few female pirates!  Then we used the diagram of a pirate ship to learn about all the parts on my 3 year-old’s toy pirate ship.

Once we read through the books, being careful to check out how the pirates dressed, we donned our own piratey wear.

Little guy said he needed boots – thankfully we still had the hand-me-down cowboy boots from his cousin.  He’s never wanted to wear them until now.  Then we made quick and easy pirate hats – just a basic pirate hat shape taped to a paper band I fit around their heads.  Me?  I went with a colorful bandana tied about my hair.  A plastic hook for him and a gold hoop earring for big sis rounded out their look.

Of course you can’t have a pirate day without treasure.  I made sure it was carefully buried the night before and made a simple map.  They had fun following the dashed line around the map to the X and figuring out where they had to go. 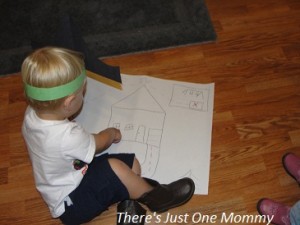 Then it was time to dig! 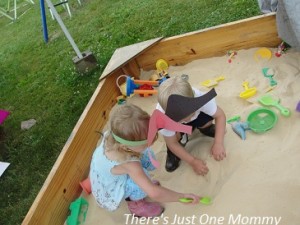 The treasure?  Huge coins I found for a buck, a toy shark and dolphin, and a box of Nerds to share. (Who says pirates can’t share?)

All that treasure hunting made us hungry, and it was time for a pirate snack! 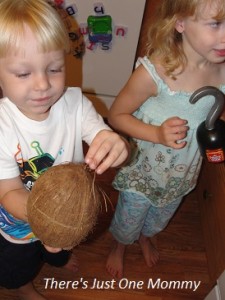 They loved listening to the water sloshing in the coconut!  They didn’t like the taste, though.  I wish I had a picture of my little boy’s face when he tried what his sister called “juice” – it was priceless!  We had all sorts of fun feeling the coconut, cracking it open with a hammer, and trying a bit of the meat inside, which they both liked a little better than the liquid.

While I prepared a hearty meal, they watched a bit of  Pirates Who Don’t Do Anything: A Veggie Tales Movie .

(Looking for a good pirate video for preschoolers?  Of course there’s the Veggie Tale one I mentioned, but Dora and the Backyardigans both have good ones, too.)

I couldn’t resist splurging on these cute dishes when I found them.  (Although for $1 for 2 plates or 2 bowls, it really wasn’t a big splurge.) 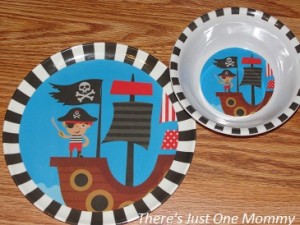 I wanted to take a pic of the food, but the crew was starving!  I could barely get it on the plates fast enough!  We had fish sticks, cheese cut in fish shapes, oranges to prevent scurvy, hardtack (biscuits), and some leftover cooked carrots (gold).

Then it was time for our craft!  I went with super simple and printed this off from the Crayola website: 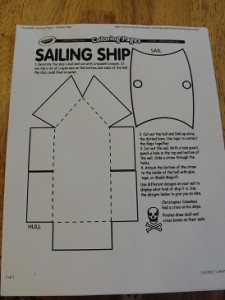 Once they were colored and assembled, I ran some clear packing tape on the bottoms so we could float them around.  You’ll also notice the toy shark and dolphin from the treasure box went swimming, too!

It was a fun day all around, and the next morning they were asking when we could do it again!

Definitely a good way to spend a summer day!