This year we were tricked.

Well, maybe not exactly on purpose, but when it comes to “Trick or Treat” this Halloween — a trick is what we got.

It all started on the school steps when I was waiting to pick up my daughter from kindergarten.   A few other moms were talking about the weather forecast for Halloween:  thunderstorms and severe winds.   And then one mom told us that she was planning to take her children trick-or-treating in G — , a small town near us.  They were supposed to have trick-or-treat scheduled for the day before (October 30) instead of October 31.

Well, since the weather that day was in dry and in the 60’s, it definitely sounded better than going out on Halloween night.  So, after verifying online that G- — was indeed scheduled to have trick-or-treat that night,  I made dinner an hour earlier than normal, helped my daughter get her homework finished right after dinner, and then I got them dressed in their Halloween finery, ready for some trick-or-treat fun. 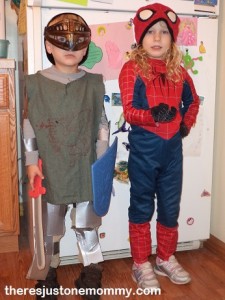 It was a foggy night, perfect for trick-or-treat.  As we pulled into the little town, I searched for signs of trick-or-treaters. There wasn’t anyone in sight.

I drove up and down the few streets, still seeing no one outside.  “Maybe they are all just finishing getting ready,” I thought.  After all, G — is a small town, and there wouldn’t be very many kids even when trick-or-treating was in full swing.

I parked the car in an empty church lot, and stepped out to unload the kids.  I think I might have seen a tumbleweed blow by.  Seriously.

As we walked up to the first building with a light on it, I realized it wasn’t a home, well, it was, but not the kind people would hand out treats from; it was a funeral home.   Okay, so maybe we had to walk down a side street.

The first house was completely dark, but I let the kids knock anyway.  The second house had a light on, but no one answered.  We were 0 for 2.  My son looked at his empty bucket and informed me that it was indeed still empty.

Third house is the charm, right?

When the door opened, the lady told me, “You’re here on the wrong night.”  I told her what everyone had said at school, and what the paper said.  (I guess I was hoping for at least a little pity candy for the little ones.)  She closed the door.

I walked two sad kids to the car, buckled them in, and then made a quick call to the in-laws, telling them to be ready, because we were stopping by to trick-or-treat.  (Yeah for Mamaw having candy on hand!)

Trick-or-treating for 2013 started off with a trick, but it did get better.  Because of the weather, trick-or-treat night at my parents’ house was moved to the next day (November 1), and the kids got to go door to door there.  But this will definitely be a year we will remember! 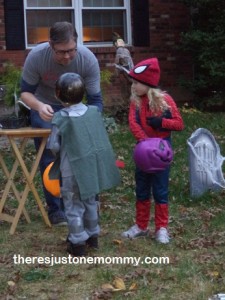 (It was so funny.  Half way through trick-or-treating, my son looked at me and said, “This is lots better than G — !”  Yes, little one, it certainly was!)

Did you encounter any tricks this Halloween?