I’ve mentioned before how thankful I am that my kids get to see both sets of grandparents fairly regularly.  We live next door to my in-laws and my own parents live just a little over an hour away.

Growing up I never really got to know my mom’s parents; in fact, I really don’t know much about her family and growing up with 13 (or was it 14?) kids.  Eventually, I know, she went to live with her oldest sister, and as a child I was blessed with Christmas every year at my Aunt Bert’s house – in ways it was very much like celebrating Christmas at a grandparent’s house.

My father’s parents didn’t live too far away, 30-45 minutes?  And we saw them each Sunday, but I can’t say I was super close to them.  My grandfather had Alzheimer’s and, frankly, my grandmother kind of scared me a little.  I remember the t.v. being on all the time (Dallas, anyone?) and spending a lot of time coloring with crayons that were stored in an old tobacco can.

So what brings me to today’s memories?  My little girl broke one of the few items I have that belonged to my paternal grandmother. 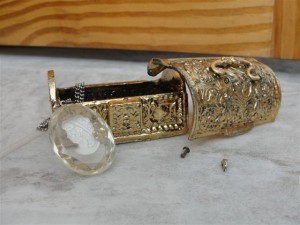 The little trinket box is probably not worth anything.  Heck, I don’t even know if it meant anything to my grandmother.  (I don’t remember ever really talking to her; she didn’t take me to her room to tell me stories about the trinket box or any family stories…  That’s the biggest reason I work so hard to make sure my kids have a close relationship with their own grandparents.)

But that’s all besides the point.

That little golden trinket box was one of the few things I had of hers.

I felt silly when, after letting my little girl know it was okay that it was broken, I began to reminisce and actually started to cry in the shower.

I was in 7th grade when my grandma passed away; my sister was 19 or 20 and our female cousin was just a couple years younger than that.   Just how did I wind up with the trinket box?  Simple, it was something no one else seemed to want.  That’s how I got the chipped piece of China and my grandfather’s old wind-up alarm clock, too. 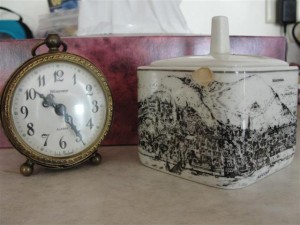 Grandma’s good China went to my cousin, rightly so, since she is the only daughter of Grandma’s only daughter.   I remember going into Grandma’s room as my aunt, cousin, sister, and mother looked through the jewelery.   Somehow in going through the jewelry, no one thought that I might want a nice piece when I got older, and I was always too shy to speak up.  I wound up with the mix-matched, junky stud earrings, (Grandma was always losing earrings, or so I’ve been told.) and a tacky, plastic cameo.

In the shower today I cried for that little girl who was too shy to speak up, who didn’t really get to know any of her grandparents, and who has just small pieces of what most people would call junk to remember them by.  I will NOT let that happen to my children.