My kids don’t miss a thing.

A new toy hidden in a shopping bag?  Better wait to sneak it in until they’re not around because they will easily see it through the bag.  The tiniest bug crawling on the wall?  They see it, from across the room.

Thankfully, at least so far, they don’t seem to have inherited my poor eye-sight.

I remember when I got my first pair of eyeglasses, back in 1st grade.  We went to church that Sunday, and we were sitting in the balcony, and I saw the faces on the priest and servers up at the altar!  I couldn’t get over it – I had no idea that everyone else had been able to see the faces of all those people from way up there.  I had taken for granted that at a certain distance things were just “not there.”

Through the years my eyes have gotten progressively worse.  To the point that when our eye doctor was examining my husband (right after he had done my eye exam) he mentioned that he had never seen anyone with such a high level of nearsightedness.  I think it alarmed my husband – we had not been married a very long time at that point.

Contacts?  I’ve tried them.  I suffered through them in high school – only for gymnastics practice and competitions.  In college I wore them for tae kwon do.  In other words, I only wore them when glasses weren’t really practical.  I remember one summer when it was suggested that wearing hard contacts might slow down the changes in my eyes; that was an awful summer…as pair after pair were tried.

Nope.  I’ll stick to my eyeglasses, thank you very much. 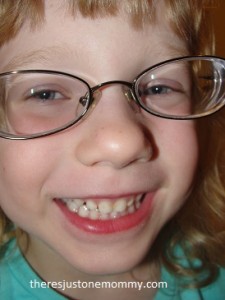 And, with any luck, these cute eyes won’t ever need to buy glasses!