Sharks are some of the largest, most fascinating creatures in the ocean.

It’s no wonder these awesome sea creatures have inspired numerous books and movies.  There is even a whole week dedicated to sharks each summer.

Whether you’re looking for some family friendly activities to do during Shark Week, or you are planning a shark birthday party, these DIY Shark Party Games are sure to get the kids smiling and having fun.

You may also want to check out some of these other shark games for kids. 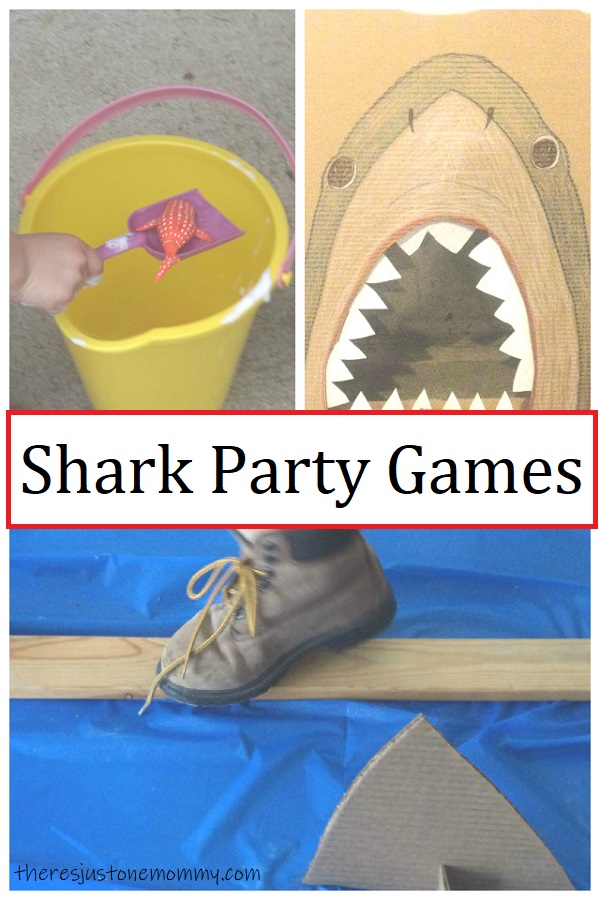 Affiliate links have been provided below.  See my full disclosure policy here.

Do you know a child that loves sharks?

Like so many boys his age, my son loves sharks.   He has even had a shark-themed birthday party, complete with a variety of  shark party games  and a “Jawsome” DIY shark cake.

If you are looking for shark party ideas, these games are a great place to start.

These 4 simple DIY Shark themed Games are perfect for a shark birthday party.  They’d also be fun to play during Shark Week in the summer.

Start by creating your very own game of “Feed the Shark.”

Use a large piece of cardboard to create this simple ball toss game.

Simply draw a basic shark head and cut out the mouth.  You can even add in some pointy teeth with white construction paper.

(Want to see more detailed directions on how to make your own cardboard ball toss?  Check out our Feed the Monster game.)

To feed your shark, tape tissue paper tails to some plastic ball pit balls to make fish.  You could also use bean bags, or you could even use rolled up socks.  (Sometimes simple is best!)

Put your “fish” in a bucket, and have kids take turns tossing the fish into the shark’s mouth. 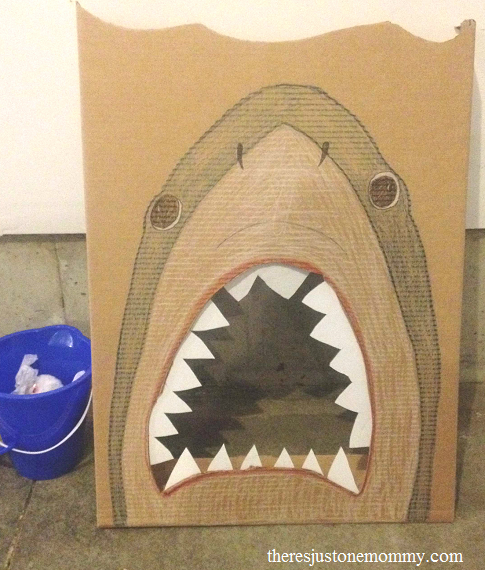 Kids of all ages will have fun “feeding the shark.”

Have older kids stand farther away from the target.  Younger kids can stand closer to it. 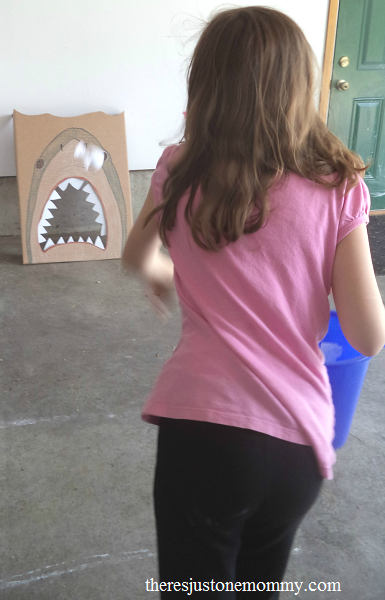 What’s great about this game is that once you are finished playing, it makes a fun picture opportunity!

It’s perfect to print out and hand to party guests as a fun souvenir. 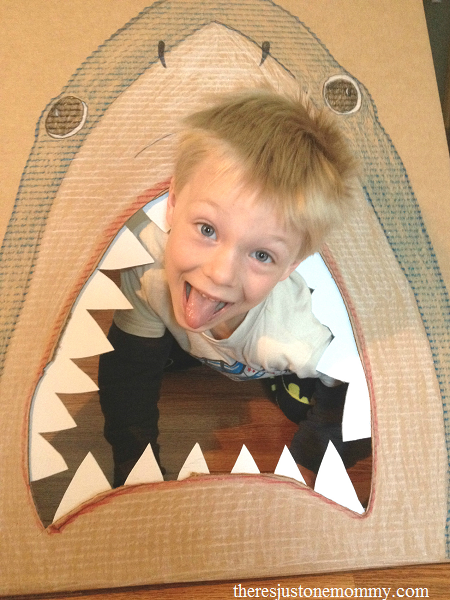 Keep the Shark Away

Another very simple party game is “keep the shark away.”

Use a permanent marker to draw shark faces on blue balloons.

Cut several pool noodles in half.

Have kids try to keep the balloons in the air, and not let them touch their bodies, while only using the pool noodles pieces to keep the “sharks” away. 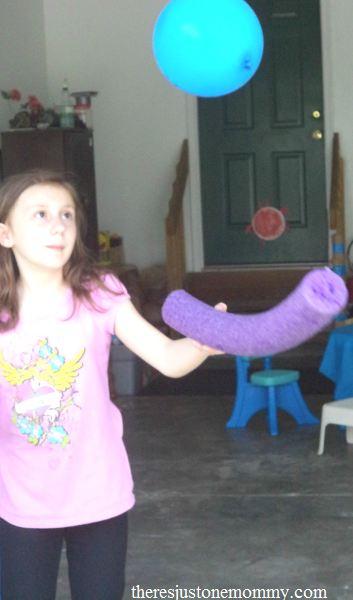 A wood board makes a fun pretend plank for this game.

Turn it into a kids shark game by placing a blue plastic tablecloth under the plank to serve as your ocean.

Create shark fins by cutting large triangles out of cardboard.

Cut a slit in the bottom of the triangle and slide a smaller rectangle of cardboard into the slit to make your triangle fin stand up.

Place the fins around the plank.

The object of the game is to walk the plank and not fall in to the shark-infested water. 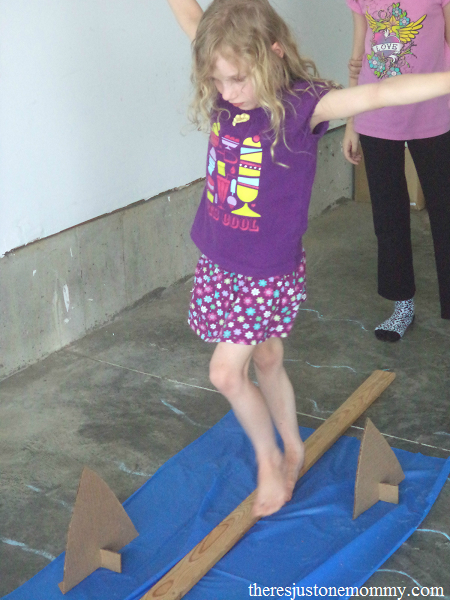 Save the Sea Animals Game

Have kids save toy sharks and other sea animals in the Save the Sea Animals game. 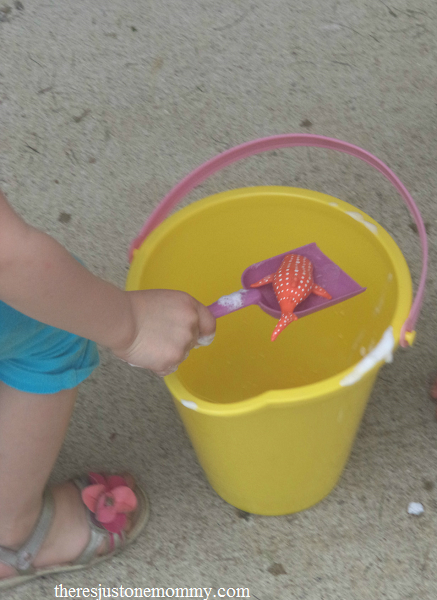 There you have it, simple and fun shark party games, just in time to add to your Shark Week activities. 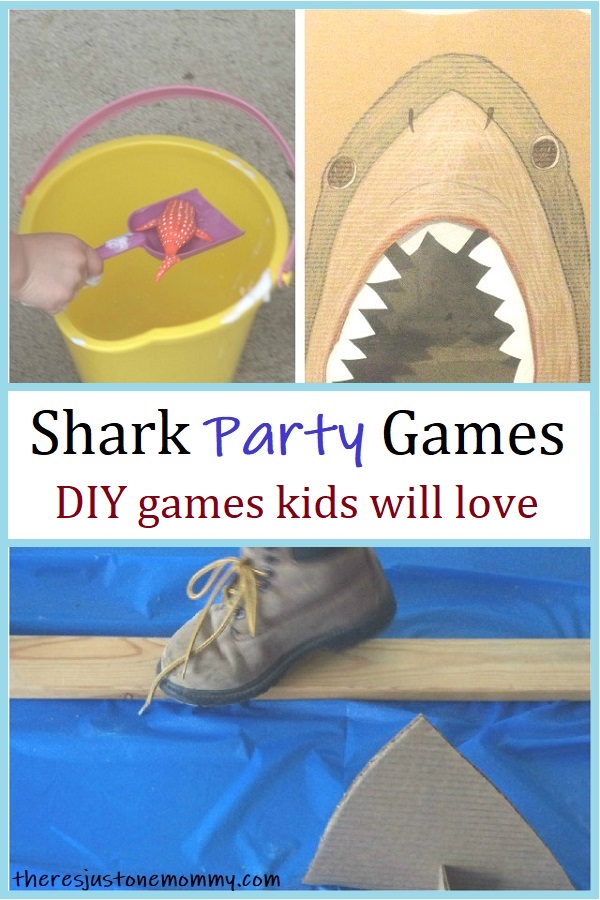