Last week, after her gymnastics class and dinner at McDonald’s, my daughter and I ran into the grocery store.  I was pretty excited I was going to be able to look at my coupons and actually use them, since Daddy was watching her brother and I only had one kid with me.

We made it through the produce department without the usual cries of her brother wanting a banana or apple to bite on as we shopped.  She happily threw a couple loaves of bread into the shopping cart for Mommy when asked; all was going well as we stuck to our list.

Then I went down the canned vegetable and fruit aisle.  Having organized the pantry, I knew we were pretty much out of canned fruit, and I was hoping for a good deal.  I perused the cans, finding no such luck and chose to only get a couple cans and hope for a sale in the future, when I realized Peanut was gone.

It’s not like Peanut to lose sight of me, and I was starting to wonder where she was, when she appeared around the corner with a box of Hostess chocolate cupcakes grasped firmly in her hands.   With all the seriousness a 3 1/2 year old can muster she said, “We NEED these” and put them into the cart. 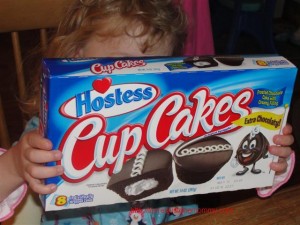 It was the seriousness in her voice that was the best part of it.  I had to stifle my laugh; I didn’t want to spoil it… And now we have cupcakes should a cupcake emergency arise!