I can’t believe we made it until February 11 before having any snow we can play in…pretty unusual for southwest Ohio.  It’s still not much, maybe an inch or so, but you better believe the kids were out in it!  (Heck, we were out right after breakfast because I was afraid it would melt in the sun if we waited too long.) 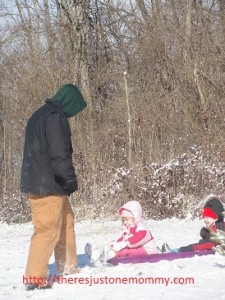 Then the toddler wanted to build a snowman.

We gave it a shot, but the snow was just too powdery soft; it just wouldn’t make a snowball.  Of course, being 2, he didn’t understand that.  Thankfully he was happy with the 2 inch tall snowman I was able to build by huffing and puffing warm air on the mini snowballs to get them to stick.  He held that little snowman all around the yard while being pulled on the sled, and then he wanted to bring it inside, too. 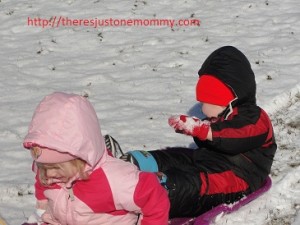 We watched it turn into a little puddle on the kitchen table while we had our hot chocolate.

And after lunch we made marshmallow snowmen – little guy actually got 2/3 of his finished before eating it this time!

What about you?  Have you had much snow where you live this year?

And if you’re looking for some crafts to go with the snow theme, check out this cute cotton ball snowman and our snowflake crafts!