I can’t believe we are nearing the end of January and have yet to see any real snow.  Yeah, we had our little “snow day” where we had a dusting on the ground, but in southwest Ohio I am used to seeing a lot more snow by now.

So we’ve done a few snowflake crafts lately to make up for our lack of actual snow.

Of course, cutting snowflakes is an old stand-by.  But when you are only 4 it can be hard to make a snowflake on your own and not be disappointed with the results.  To help Peanut learn how to cut a snowflake, I folded the square of paper in half and half again.  Then I drew on the paper where she should cut. 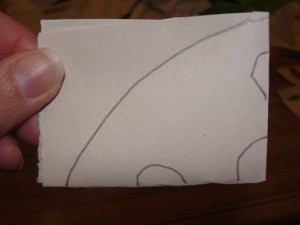 Not folding the paper any more than that made it easier for her to cut through the layers.  I also learned that straight cuts were easiest for her (think triangle cuts), but rounded cuts were good scissor practice.  She was proud of every snowflake she made, and she hung them all on her door to show them off when she was finished. 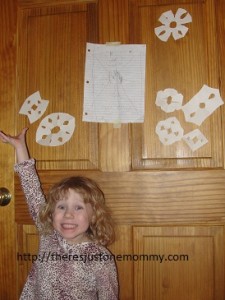 My next snowflake craft idea involved paint.  I gathered a few water bottles we have gotten from zoo trips and other outings, and even the plastic covering that came off the grill’s propane tank (for some reason the kids had claimed it and had it in a box of odds and ends). 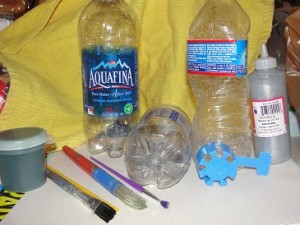 I was planning on  using these items as stamps.  I wish I had white or blue paint on hand, but at the time green was my only choice… I mixed a little glitter glue into the green paint to give it a little sparkle.  Then we used paint brushes to paint the bottoms of the bottles and stamp our paper with snowflakes. 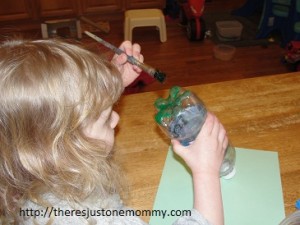 The 2 1/2 year old had a blast smacking his stamp all over the place.   I can see other stamping crafts in our future…

How about letting your little one drive his/her cars through some “snow?”  A handful of uncooked rice in a high-sided cake pan gives your little one a world of snow to use little front loaders, dump trucks, or if you’re lucky enough to have one – a snowplow. 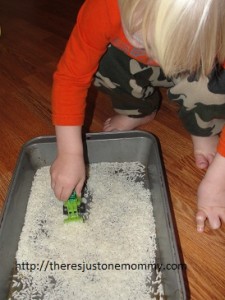 Finally, I was thinking we would make a little snow of our own…  I have several empty freezer jam containers with nice tight lids.  Originally I was thinking we’d use wax paper or parchment paper to make snow and add a little water so it could float around.  Problem?  Wax paper is almost see-through so you really couldn’t see it in the water, same with the parchment paper.  (Thankfully I tried that ahead of time…)

So I had the kids rip up some plain white paper…  They had fun with the ripping part, but weren’t really excited about their snow.

Then it hit me – rice!  Just as we had used rice to drive cars in the “snow”… A handful of rice and water and they had their own little snow storms to play with.  (Of course the rice swelled in the water overnight, which was another lesson the next day…)

And be sure to come back and check out our snowflake cookies this Friday!