Last week I told you about the dangers of spring cleaning.  If you missed it, here are the highlights:  slippery kitchen floors from spraying furniture polish and dusting the ceiling fans/cabinets; falling from chairs as I hung up the curtains I washed; and being trapped by the king sized mattress I stupidly tried to flip myself… Yes, dear readers, spring cleaning is not for the weak!

One thing I’ve come to accept is that I no longer can have a room be “entirely clean” at one time.  It isn’t possible with little kids… So, I am just tackling what I want to get done when I think I might be able to actually finish the job.  LOL!  This past week it was the pantry, which I had been just tossing grocery bags into until I could organize it later… (Later never seems to happen, you know?) 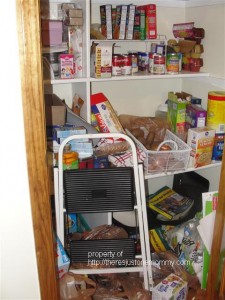 That’s what it looked like when I started.  Scary, I know.  I have a doorknob baffle on it so the kids can’t open it… Thankfully.  Every time I tried to tackle this mess someone would start crying, or try to weasel past me to make a grab for something in the pantry.  It was a several day process.  I started out by getting some of those handy diaper boxes we seem to have tons of; I thought they would make some pretty cheap extra shelving for lighter items… 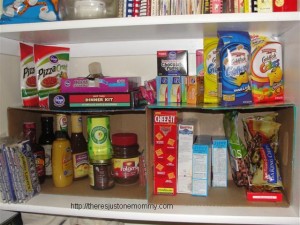 I realize you can’t put very heavy items on top, but it has made it so the shelves aren’t so crowded I can’t find things.  Eventually I’ll probably buy some more wire shelving… But Mommy was trying to get this done, and that’s what I had on hand!  (Besides, as long as we’re going through diaper boxes, I might as well find new uses for them!)

When I finally made my way to the bottom of the pantry I found our long-lost grill tools beneath 3 years of phone books.  (Time to recycle those!)  I decided to hang them up where we might actually see them and use them this year!  A few screws later and… 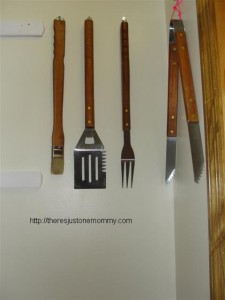 Like I said, it was a several day process, but in the end, I was proud of the results… 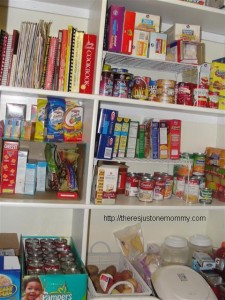 You’ll notice I used another diaper box to put all our soup we bought at Sam’s club.  I have two others on the floor with extra canned goods, all labeled now so we can find what we need.

Now that that’s done, I’m off to tackle the basement…