My son loves cars.  No, let me rephrase that, he is obsessed with cars.  Toy cars litter our living room at all times, the sheets on his bed all have cars, and every shirt he owns has a vehicle on it.  (We even did a full year of ABC’s with vehicles for preschool.)

The other day he plopped his little beanie stuffed elephant into a half empty box of tissues and started zooming it around.  That’s when this fun tissue box craft idea formed — stuffed animal vehicles.

You might also want:  clear tape, cardboard tubes, glitter, paint, markers, pipe cleaners, pom-poms…. It all depends on what kind of vehicle your child wants to craft and how involved you want to get.

Start off by asking your child what kind of vehicle they want to make.  It’s a great way to let them start getting that creativity flowing.

Once they have some ideas, cut the construction paper of their choice so you have pieces that will fit all 4 sides of the box.   Have your toddler/preschooler use the paintbrush to cover the sides of the tissue box with glue.  Then glue on the colored paper. 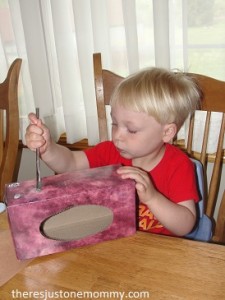 Once the sides are covered, cut another piece to cover the top, cutting a hole out to match the one on the tissue box.  Have your child glue it on.  We used a bit of clear tape around the hole area to keep the paper from tearing. 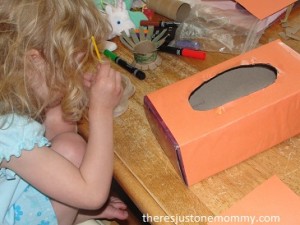 My daughter wanted to make a carrot car for her little green bunny to drive.  We used a cardboard tube to be the green part at the end of the carrot.  She used a marker to color it green and had fun cutting slits in one end of it to make it fan out.  Then we taped it to one end of the tissue box car. 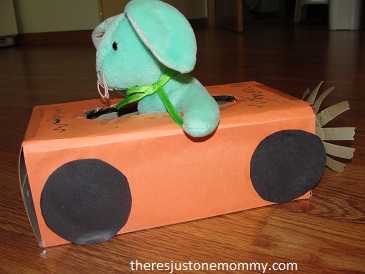 My son wanted a backhoe (digger) for his elephant.

We cut one tube in half to become the truck’s front shovel.  A strip of cardboard became the boom for the backhoe’s digger, and we used another piece of cardboard tube for the back scoop.   Tape held it all together.

4 black construction paper wheels were added and elephant was ready to go for a ride. 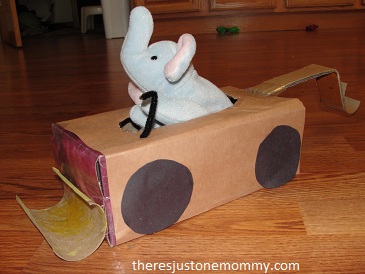 This tissue box craft was a big hit with both my preschoolers.  Don’t you just love crafts that can be played with afterwards?  They spent hours engaged in pretend play as their stuffed animals zoomed around the kitchen floor.