I’ve mentioned before that my son likes to do things his way.  If I try to tell him how to write a letter the right way, he turns me off.  Tells me I am wrong.  Gets mad.  Let’s just say it isn’t pretty.

I’ve drawn a lot of dotted letters for him to trace, gotten a few workbooks — which he loves.  But then I started seeing this great idea pop up all over Pinterest:

Writing the letters or numbers with a highlighter is a lot easier than writing them in little dots or dashes, and a lot more fun for the little guy to trace!  (Have them trace the letters/numbers using a different color marker and watch the colors change as an added bonus!)

Then there are shapes.  He can make a pretty good circle by himself, but squares, rectangles, and everything else tends to look like a circle, too.

Of course, you could draw those in highlighter, too.  But the other day, as I was putting away our Play-Doh stuff, an idea hit me.

We have a bunch of cookie cutters in various shapes with our Play-Doh stuff, and they tend to not get used much.

What if we used them another way? 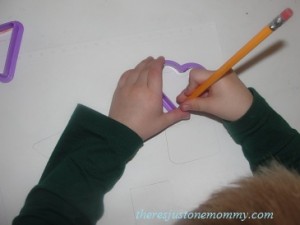 It’s funny.  As soon as he saw that I had “forgotten” to put the shapes away, he was super interested in Mommy’s idea.

He practiced tracing inside the cookie cutter shapes (we turned them upside down so they were easier to trace) over and over.  His pencil lines are super hard to see, but if you look hard, he has squares and triangles all over that paper!

Suddenly, learning how to draw shapes was a lot more fun!