Last night my daughter started picking up the toys in the living room.

There was no fighting, no whining, and no, “I’m too tired….”

I’m sorry, but this is HUGE.  While little brother is generally willing to help clean up,  my Peanut usually finds some excuse not to.

But, ever so slowly that has been changing.  And last night she actually started picking up all on her own.

I’m thinking it has to do with these awesome chore charts I picked up at… (drum roll, please) good old Target. 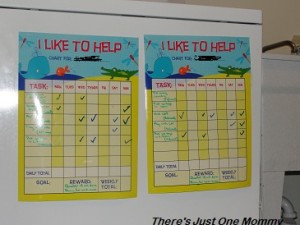 I’d been wanting to start something like this for a while.  After all, helping with chores around the house is so beneficial to kids.  Doing chores helps them feel like a contributing member in the family, allows them to learn some basic house-keeping skills, and can increase their self-esteem.  Chores can also help them respect their home and belongings more and give them a sense of pride in a job well-done.  All of this, while teaching them responsibility.

Of course, I wasn’t thinking of assigning big chores like washing dishes (although my daughter loves to give that a try sometimes!) or cleaning toilets, but I did have a few preschool appropriate chores in mind.

When I pulled out the charts the kids got super excited.  (They love anything new!)

I had one chore planned ahead of time for each of them.  For my little girl it was “pick up toys in room.”  Seriously, is it just me or do all little girl toys seem to have numerous itty-bitty parts?  Littlest Pet Shop, Polly Pocket, My Little Pony…  When they are all out at once it is complete chaos!  Usually I just toss things back where they belong myself throughout the day, but I want her to start learning to pick up one before getting a new item out.  I even added a goal for this of doing it at least 1 time a week.

For little guy I wrote “sleep in own bed all night” on his chore chart.  His goal is 3 times a week.

After that I asked them to help come up with chores to add to the charts.

Each of them is responsible for feeding one of the family pets each day.  Peanut feeds the cat and Monkey feeds the dog.  They also have “play with pets” on their charts — Fluffball (A.K.A. the cat) often gets forgotten out in the garage, so I wanted to encourage them to play with her more often.

My daughter recently started helping me put away laundry (just the socks and underwear), so we decided to add that to her chore chart.

Remembering how she used to help get the dishes out of the dishwasher for me when she was younger, I put that chore on little brother’s chart.

They also both have “pick up toys in living room” on their charts.  (Which is what she started doing last night, before the kids went to brush their teeth and get ready for bed.)

We have had our charts up on the washing machine for a month now, and they still WANT to earn their check marks.  (By the way, Little guy is so proud of himself when he sleeps in his own bed all night now.  I’ve even had him ask me to tuck him back into his bed when he woke up at night, rather than wanting to sleep in our room, which is his usual routine.)

Yes, I know there will still be battles over picking up toys.  But I also know that with every check mark they are gaining much more than just pennies.  Pride, respect, and responsibility are qualities that will last them a lifetime and help them as they grow into adulthood.