As promised, I have directions for our teapot cake and the coordinating cupcakes we served at Peanut’s 5th birthday party…

When we first decided on a tea party theme, I was thinking, “No big deal.  I’ll make some cupcakes, decorate them like teacups.  Easy-Peesy.”

But, I should know by now, my little girl is always challenging my creative side.  Right away she asked me, “But, Mommy, what about the teapot?”

I suggested I make a teapot by cutting the shape out of a sheet cake, but she wanted one that stood up, 3-dimensional, just like the teacup cupcakes would.   So this is what I came up with: 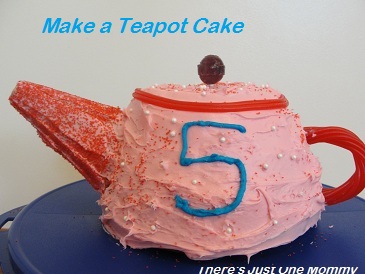 Want to make your own tea pot cake?

It really turned out to be quite simple.

I remembered that the 8 cup measuring cup I have can be used in the oven.  (Have you seen those princess doll cakes where they use the measuring cup to make the doll’s dress and stick a Barbie in it?)   A light bulb went off when I thought about that…  I just had to figure out the handle and spout.  (To bake it in the measuring cup:  First make sure it is one that can go in the oven!  Pyrex and Pampered Chef both have them.  Then just follow the cake mix directions.  You will need to cook it quite a bit longer than the box says, I think mine cooked 15 minutes longer.)

I had quite a few crazy suggestions (from cooking it in a teapot and then cutting it out, to using styrofoam and icing it…)  I decided an ice-cream cone would work, and I was really excited when I found out they had small waffle cones at the grocer’s because they were angled just right to be a spout! 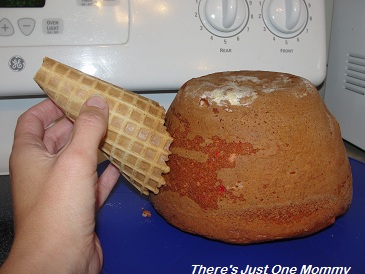 I didn’t have to cut the top part of the cone at all… I did saw off the tip with my bread knife.  Super easy.

After icing the teapot’s body (pink, of course), I spread a thin layer of icing on the waffle cone.  Then I rolled it in some red decorator sugar (after all, little girl’s love lots of sparkle) and used a table knife to cut a 1/4″ deep circle on the cake where the spout would be going.  (Basically I traced the cone.)  Then I just stuck it in and touched up the icing.

For the handle I opted for candy.  Can’t go wrong there!

I bought a bag of Twizzlers Pull-n-Peels to do the teapot and teacup handles.  I used one piece for the teapot’s handle, sticking both ends into the cake to form the handle.  I pulled another apart leaving 2 strands stuck together to circle the top of the teapot and make the “lid.”  A purple lollipop formed the knob for the lid. 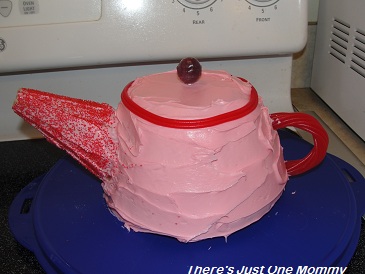 You could stop right there… But I added some candy “pearls” I found in the cake decorating area, a little more of the red sugar, and the number 5 on the side, since it was her 5th birthday.

Now for the cupcakes, I mean teacups…

Once they cooled I popped them in the freezer for a few minutes.  Then, working with 4-5 at a time, keeping the rest in the freezer, I used my bread knife to saw off the tops and make them flat. (That bread knife got a workout for the tea party — if you think of all the finger sandwiches I cut crusts off of…)

Then I held each cupcake between my thumb and index finger and iced just the sides of the cupcake.  (Oh, did I mention you have to take the wrappers off for these?)

Once they were iced, I sat them on the tray and used decorator icing to draw the cup’s rim on the top.  Then I pulled a bunch of those Twizzlers Pull-n-Peels apart so there were 2 strands together and cut them in 2 1/2″ lengths.  These were stuck into the cupcake’s sides to form the teacup’s handle.  I could have decorated the sides more, but honestly, at that point I was getting tired of looking at cake stuff…

There you have it, a tray full of edible teacups! 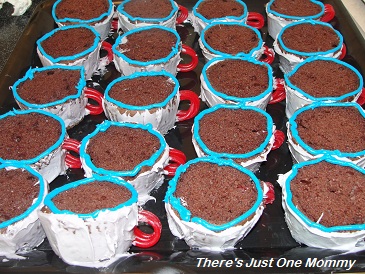 (One thing to note:  If you do your cake and cupcakes the night before (like I did), the Twizzlers will break some.  You’ll notice the teapot handle in the picture with the birthday girl doesn’t look as nice.  Adding the handles the day of the party may be a better bet.)