You don’t really think about it too often, that is, until you turn on the faucet and nothing comes out.

Without running water in the house, all of those tasks get A LOT harder.

Monday we woke up and had no water.

We’ve had boil advisories before, but water still ran from the tap — you could still do laundry and dishes, you could still get a bath; you just had to boil the water before drinking it, or better yet, have some bottled water on hand for such emergencies.

But on Monday, we had zip.

Of course the dishwasher was completely full, a bit stinky, and definitely needed run.  There were dishes in the sink.  And Mt. Laundry was towering in the utility room — seriously, it was stacked almost as tall as I am.

And there was no water.

No big deal.  I mean, certainly the water would be back soon.  Right?

I brought up the gallon of water we had downstairs.  (We had more, but over the summer I discovered one had sprung a leak, and another was yellowish — eww!  And I had forgotten to replace them.)  I poured some in my coffee mug, and made my mandatory morning cocoa. 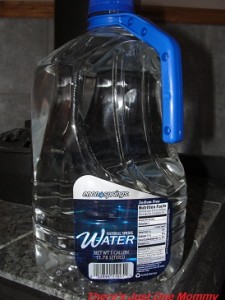 A few hours later we got a couple more gallons of water, and I took out some of the frozen water from the big freezer downstairs so it could thaw.  Word was that a water main had broken, and it would be at least until Wednesday evening before we could drink the water.

We still had nothing coming from the tap.

Since we all had plenty of clean clothes (Yeah!), I wasn’t too worried about Mt. Laundry, but the dishes?  They were starting to make me concerned.  I couldn’t have dirty dishes laying all over the place.  Definitely a health hazard.  (Okay, maybe I was over thinking it a bit.  But thoughts of upcoming stomach viruses loomed in my head.)

Then my prince in camouflage came to my rescue.  The husband grabbed a couple 5 gallon buckets with lids and hiked to the neighbors who still have their well water hooked up.  I decided to put the soap in the dishwasher and close the door, figuring that way when we did get water back I could just hit the button, and if it took a few days, I wouldn’t have to open and smell the contents just to put soap in.  I put a little soap in a sippy cup, added a little of the water from the bucket, and shook it until it was good and foamy, and then poured it and some of the water on the dishes in the sink and got to scrubbing.

Okay, I felt a little better.  Plus, now we had plenty of water to flush the toilets, should we need to.  (A plus when you have a little boy who can really stink up a bathroom.)

We went most of the day without running water.  A minor thing really, in light of how many people in the world live that way on a daily basis.

And that’s why running water is high on my list of things to be thankful for this week.

You’re turn!  What are you thankful for this Thankful Thursday?  Leave a comment, or link up your own THANKFUL post below.  I’d love it if you linked back to There’s Just One Mommy!