Hard to come by sometimes.  But I am thankful today to be able to report that there are still good, honest people in the world.

Last Saturday I took a load of no longer played with toys and outgrown clothes to Once Upon a Child.  (I’ve already mentioned how thankful I am for that store – makes it easier to live on one income with little ones!)  Since it was Saturday, it was a pretty busy day there; they said it would be a couple of hours before they could go through my stuff.

So I headed to get the oil changed in the car (another errand that had needed done for a few weeks now…).  When I got to the car place I realized I had left my 10% off coupon in the box of stuff for Once Upon a Child.  For some reason it had seemed like a good place to put the coupon at the time…  Oh well, I figured it was just a couple of dollars, I’d live.

After the oil change and a few other errands, I returned to Once Upon a Child.  Woo-hoo! 75 dollars I get to spend on spring clothes for the kids or little goodies, not a bad haul.  It wasn’t until I got home that I looked at the few pieces they hadn’t taken and realized how lucky I was.

There was a whole package-worth of brand new undies for each kid that had somehow wound up in the box.  (I know that I had these sitting on my dresser, waiting to get put away… I’m thinking a little girl, or a little boy I know put them in the box of clothes going to Once Upon a Child – trying to be helpful.)

And then I saw it.  My 25 dollar gift card to Walmart that I got at Christmas time.  I had almost forgotten about it.  (Yes, my dresser needs some serious cleaning this spring!) 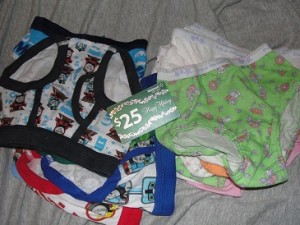 It would have been easy for someone to pocket the card while going through the clothes and toys.  It could have gotten put in a different box.  Or pitched.  I am sure it was probably tempting just sitting amongst the clothes.  Heck, I didn’t even know it was in the box.  (Probably got put in there by little hands, too…)

But there it was.

And so this week I am thankful that there are still honest people in the world.

(And I’ve learned that I need to go through the stuff going to Once Upon a Child or being donated right before I actually take it, just in case some little fingers try to be helpful again!)

Have another example of honesty in the world still?  Something else you are thankful for this week?