As I mentioned earlier, my little girl turned 5 this week… I still can’t believe it!

To celebrate we had a tea party with all the grandparents, 2 uncles, and a few friends… 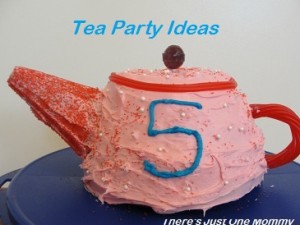 A couple weeks before the big day we made our invitations. To make them I folded cardstock and drew a tea-cup shape on one side, so that when it was opened you had 2 tea-cups. Then my birthday girl decorated each one. (She had a tractor on Papaw’s, flowers on another… Each was totally unique.) 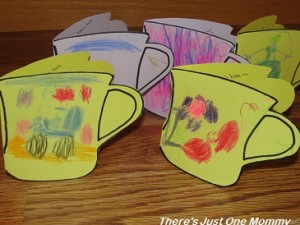 Inside was written: A place has been set for you! That was followed by all the important party information.

The day before the party my little girl worked on some party decorations. Again, I had tea cups drawn on card stock. She used a paint brush to apply glue and then shook on plenty of purple glitter! We hung them with curled ribbon from each kitchen light and the curtain rod. 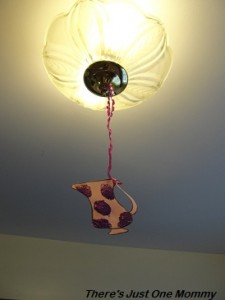 Simple, inexpensive, and it gave her something to do while I worked on making sandwiches!

We had plenty of finger sandwiches on hand! 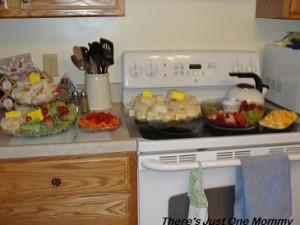 For perfect tea party sandwiches, start by using a bread knife to cut all the crust off the bread. (You can do 6-8 slices of bread at a time if you stack them. This saves time when making over a 100 little sandwiches.) If making the sandwiches the night before (like I did), spread each slice of bread with a light layer of butter. This will prevent the bread from becoming soggy. Then add your filling, second piece of buttered bread (butter side down) and cut into 4 squares. For our tea party we had: egg salad, chicken salad, cucumber and P.B.&J. (as requested by the birthday girl). We also had 2 types of wraps made with roast beef and cheese and ham and cheese. I cut the wraps into 3 equal-sized pieces, stuck a toothpick in each and topped it with a mini tomato. 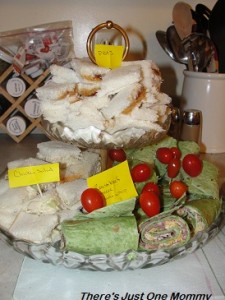 Along with finger sandwiches we had cheese cubes, a little veggie tray, and a collection of fruit. I have to say, out of all the birthday parties we’ve had, the kids really ate up all the tea party goodies!

To set the mood for out tea party, the tables were set with table cloths, fancy tea cups (I found plastic ones at the Disney Store for the kids to take home as their “goodie bag.”) and a toy tea-pot with dollar store flowers stuck in as a centerpiece. 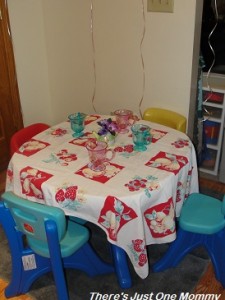 Before lunch we played pin the handle on the tea-pot and did “I’m a Little Tea Pot.” 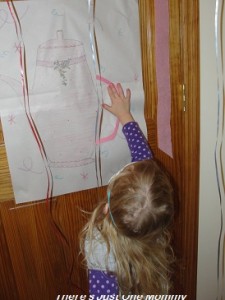 And you can’t forget cake time! Along with our tea-pot cake, we had a tray full of tea cups… 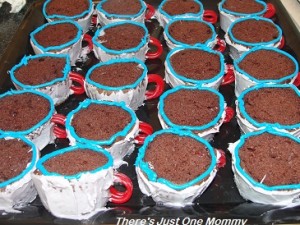 Click for the directions for our tea pot cake and cupcakes! 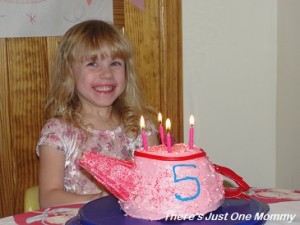 This was one birthday party I know she will remember!